I have been playing through some of Domenico  Scarlatti’s Essercizi on piano the last few days. A couple years ago I purchased my former teacher’s copy of his complete works for keyboard.  It’s not a great edition and is over edited in them manner of the 19th century scholarship. But I have been playing through them ignoring the incorrect editing as much as possible and am on volume 5 of 11 volumes.  Scarlatti wrote 555 of these little keyboard sonatas, most in one movement. I find them charming and surprising. 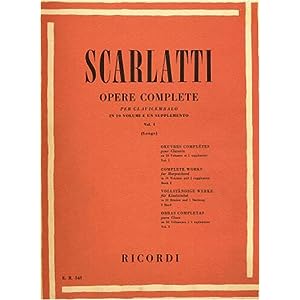 I picture Scarlatti as he was, a son of a famous Italian opera composers (Alessandro) spending most of his adult life in service to the Spanish Court. He didn’t write operas which made him pretty unfashionable at the time. Instead he wrote, performed and taught keyboard pieces. His students were in the royal families of Portugal and Spain.

He is known for the quirkiness of his music. It is often rhythmically surprising and even tempts one to think he is emulating Spanish folk rhythms that he would hear on the street in Spain. His harmonies are sometimes outlandish and even sound dissonant to the modern ear. His melodies dance all over the keyboard and intertwine the hands with the right hand often passing the left hand and dipping into the bass and the left hand hand scrambling up into the high keys.  He loves to have the hands jump to these places as well.

Yesterday I kept playing one of them over and over.  I marvel at the basic idea that via music notation I can recapture the joy and charm that Scarlatti put into this piece in the 18th century. The music itself is so alive and full of meaning to me. It’s almost eerie that I can have this communication with someone so long dead. Sometimes I talk to dead composers in my head. Often I apologize to them for screwing up their music, “Sorry, Scarlatti!” Yesterday I was simply basking in the beauty emotion of this music.

In the first video you can see this particular piece being played as well as hear it. The recording is not very good. The first player takes it more the tempo I like, though, a bit slower than the second video which has better sound.

Anyway, this was a very nice part of my day yesterday.

Yes, Congress Is in Session (for a Few Seconds, Anyway) – NYTimes.com

I know I linked this yesterday, but I wanted to comment a bit on it today.  Appiah is Krista Tippett’s guest on this week’s “Being” radio show.

I think I learned something about myself from this guy. He talks about his ideas on “honor” and how it has been significant in moral shifts in society. Also how important honor is in most human societies.

In U.S. culture one thinks more easily about the concept of respect (which is an expression of honor). When my brother was visiting he pointed out that most of my colleagues in the area just don’t “get me.” He brought this to my attention by suggesting that if I had returned to Detroit after grad school I would have had a ready made group of colleagues who were as eccentric as me and many of them in similar ways.

Instead I am living in an area where few people understand and respect my work and abilities. I was reading a letter to the editor in the most recent New Yorker magazine. The writer was describing  “the traits that make women different—the ability to pick up subliminal codes, develop relationships, collaborate..” I was struck once again that when gender stereotypes are articulated I identify strongly with the feminine.  This seems to contribute to the difficulty people have in “getting me.”

I have been grappling with this whole notion this summer and hopefully am coming to some closure around the idea that I have little honor and respect with many in this area.

The trick is to get past the humiliation. I hadn’t thought of it quite like that until I heard Appiah talk about his ideas and his own life.

It makes sense to me that one cannot compel respect, but that it does entail understanding one’s self as worthwhile in spite of the fact that one is invisible, under-estimated or whatever.

I don’t feel this as negatively as it probably sounds.

It’s more like Scarlatti. It attracts me that he developed his art in an independent way and was living in the shadow of his father and was ignored by many of his colleagues and benefactors because he didn’t write operas.

Anyway, what I really feel is gratitude to him and also grateful to get a life where I get to do music. That’s really how I feel about “honor.”

One thought on “thank you, scarlatti!”