Freidman’s wisdom continues to haunt me. I reread more in his last unfinished but published work [Leadership in an the Age of the Quick Fix] this morning. I am going back and forth between the privately published unedited version and the more polished published version. I consult with the old version primarily to look at my notes and see if they left anything significant out of the second.

I hesitate to share too much here because I think I might not express my ongoing insights clearly. But as I read Friedman I wonder how his understanding (his “way of thinking”) as I understand it is showing itself in my daily life.

For example, last Sunday afternoon I found myself in the parking lot of my Mom’s nursing home feeling that I had not handled her recalcitrance well. Of course I did all this in my angry voice. I didn’t mention this yesterday but this bullying of mine was a technique I used more than once when Mom was having her worst times with Dad’s death and refusing to go to appointments. It is a weird reversal of parental role from child to parent. I hope that I don’t do this to my care givers, but probably will.

Anyway, when Eileen and I showed up to take Mom to her appointment yesterday, she was in her bright red suit, all smiles and had even asked the nursing home for the usual medication list we need to take with us to appointments. When she got in the car her first words were an apology about how “ugly” she had been the day before.

Was my behavior with her a Friedman “taking of a stand in the face of recalcitrance”? Or was it simple exhausted acting out of frustration on a loved one? Maybe some of both?

At any rate, I was surprised by her apology. Her cognitive function has been constantly improving. This was one reason I was so blind sided on Sunday. Now here she was actually apologizing for her behavior. I greeted it with relief and acceptance. Since she said that the reason for her behavior was that she just didn’t want to go to the doctor appointment, I told her that if there was any way to avoid such appointments I would be the first one to arrange for it, but that they were probably necessary.

This is tricky stuff.

The whole Friedman way of thinking is extremely tricky. It challenges me to constantly try to find clarity in my thinking and honesty with myself. At the same time, I sometimes notice people’s behavior that seems to fall under the Friedman ideas of immaturity, indecisiveness, and what I think of as “globbing” (other people’s lack of self regulation and ability to discern where their personality ends and other people’s begin). Friedman suggests self definition is the answer to this kind of behavior. This is a difficult order but can be effective if done with clarity and honesty.

At any rate, I restrain from listing off the clear insights of Friedman, If anyone is interested, I say get the book Leadership in the Age of the Quick Fix and see what you think. 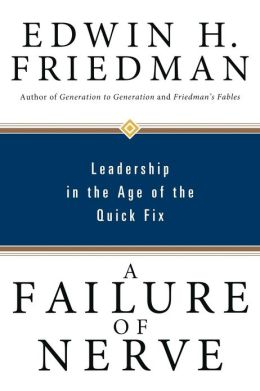 It’s not just a book about the conventional notions of leadership.