whew. So Xmas did take quite a bit out of me. Feeling guilty that I haven’t gotten back to my bud, Jordan about playing sax pieces while he’s home from “collage”. He gave me scores and linked me in to downloads of recordings of the pieces. I am just getting to messing with it today. Lovely music. But I don’t think I will have time while he is home to work up the accompaniments. As the great bigoted Healey Willan used to say of himself, “Can’t play for beans.”

Christmas Day found me a bit stunned. I had invited my Mom over for breakfast. She decided to stay warm and safe in her apartment due to the inclement weather. We visited her for about an hour and took her Xmas goodies.

Then we drove up to Whitehall for the Hatch gathering. When we arrived the party was in full swing. The majority of the people crowding the double wide trailer where Eileen’s Mom lives were kids. Happy kids. Good energy. 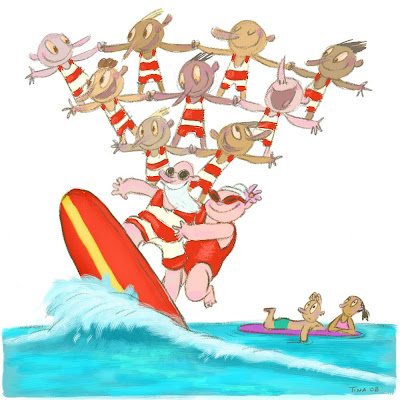 One of the happier Hatch events I have attended.

After a few hours we were back home in Holland.

I was beginning to tire. Elizabeth’s plane was due in around 10 PM in Grand Rapids. We managed to drive into the new set-up there and pick her up without even having to park. I think we were all glad to see each other. Back home through the dark icy rain to some happy chatter and trading stories. Nice to have Elizabeth home in person. She is planning on taking Edison away which is good news for her partner Jeremy, but slightly sad news for me. Edison is the best cat I’ve ever had to live with. I tried to talk her into taking the crazy cat (also hers) Mischief but to no avail. Mischief is like our slightly dotty cranky old aunt living with us.

I did manage to track down some of the online readings David Brooks recommended in his NYT article recently. [link to his article]

He calls them the Sidney awards.

He recommended (couldn’t give an award to because he made NYT articles ineligible) David Rohde’s series on being held captive by the Taliban. I read these as they were posted on the web. I find that I am most entranced by good writers who spread out and use a few thousand words. I enjoyed this quite a bit.

I haven’t read Atul Gawande’s piece, “The Cost Conundrum,” (David’s Choice no. 1) in The New Yorker. But happily bookmarked it for future reading on health care issues.

On the other hand I have read David’s Choice no. 2 David Goldhill’s “How American Health Care Killed My Father,” in The Atlantic. It was this article that helped me understand that the true customer of American health care is not us patients but the insurance companies.

Speak of Health Care Issues, I clicked on David’s Choice no. 3 and read a wickedly witty little piece by  Jonathan Rauch called  “Fasten Your Seat Belts – It’s Going to Be a Bumpy Flight” in The National Journal. Rauch develops a hilarious metaphor for the cumbersome antiquated Health care in the U.S. What if airlines were run like health care?

I also read David Grann’s “Trial by Fire” in The New Yorker when it was published . This is a disturbing piece on the botched investigation & execution of Todd Willingham, who was accused of murdering his three children by setting their house on fire in 2004. This was David’s Choice no. 4.

I bookmarked Choice no. 5 for future reading. Matt Labash profiled Marion Barry, the fascinating ex-mayor of DC in “A Rake’s Progress”.

David’s Choice no. 6 was a historical article on the region around Afghanistan, “Rediscovering Central Asia” by Frederick Starr in The Wilson Quarterly. I bookmarked it wryly recalling that Americans learn their geography and history through their wars.

Brooks promises more in his next Op Ed piece. I will check them out. I feel a bit smug because Brooks is on the opposite fence of me philosophically (conservative). But I do find him intelligent and usually well reasoned if not informative.

In addition to David Brooks’s links, I ran across a few more things recently:

http://www.html-kit.com/favicon is a cool online program that will convert graphic files into those neat little icons that appear on your browser when you bookmark a link.

Presumably it would appear without the big yellow one.

http://mypalsatan.com/about.php seems to be an online internet video series. A madcap goofy plot about what it would be like to have Satan for a roommate. I plan to check it out in the future when my brain needs serious rotting.

Joe Sacco is a talented journalist who makes excellent and evocative pictures of his essays. I have read some of his stuff before.  This is a link to a review of his new book, “Footnotes in Gaza.”  Sacco (along with other historians) points to a tragic event in Gaza in 1956 as seminal in what’s going on in the Middle East right now. I plan to interlibrary loan this book if I can.

I bookmarked this one for Eileen:

It’s about something called a Bloom Box which generates electricity chemically from waste. Very cool.

Finally a link to a review of bio of Handel. Looks interesting.

I have come to realize that when people talk about the “internets” they are often talking at cross purposes. As I read recently online, when was the last time you heard the phrase, Information Highway.

For me it still is an Information Highway as well as a Information Universe. An amazing place with so many people and resources like articles, mp3s, sheet music, online books… not to mention keeping contact with loved ones and interesting ones.