This morning I ordered four new (at least to me) books.

First I ordered my own copy of Michelle Alexander’s The New Jim Crow: Mass Incarceration in the Age of Colorblindess.

I’m on page 42 of the library copy. I spent some time this morning taking notes on this book. It is helping me understanding the political environment in the US we are living and the history of how we got here.

Here’s some of the quotes I put in my reading notes doc this morning. I find these ideas both enlightening and upsetting.

“What has changed since the collapse of Jim Crow has less to do with the basic structure of our society than with the language we use to justify it. In the era of colorblindness, it is no longer socially permissible to use race, explicitly, as a justification for discrimination, exclusion, and social contempt. So  we don’t. Rather than rely on race, we use our criminal justice system to label people of color ‘criminals’ and then engage in all the practices we supposedly left behind. Today it is perfectly legal to discriminate against criminals in nearly all the ways that it was once legal to discriminate against African Americans.” p. 2

“The United States imprisons a larger percentage of its black population than South Africa did at the height of apartheid.” p. 6

Even in the age of the development of Jim Crow, the roots for our modern situation were being placed. Consider this 1871 Virginia Supreme Court ruling Alexander quotes which uses shocking language, explicitly referring to convicts as “slaves of the state.”

“For a time, during his service in the penitentiary, he is in a state of penal servitude to the State. He has, as a consequence of his crime, not only forfeited his liberty, but all his personal rights except for those which the law in its humanity accords to him. He is for the time being a slave of the State. He is civiliter mortus; and his estage, if he has any, is administered like that of a dead man.”   Ruffin vs. Commonwealth, 62 VA . 790, 796 (1871)

I grew up listening to political discourse which I could see was hate rhetoric disguised, but I still find the clarity of Alexander’s observations sobering.

After the fall of Jim Crow: “[W]hatever the new order would be, it would have to be formally race-neutral—it could not involve explicit or clearly intentional race discrimination. A similar phenomenon had followed slavery and Reconstruction, as white elites struggled to define a  new racial order with the understanding that whatever the new order would be, it could not include slavery.” p. 40

“Proponents of racial hierarchy found they could install a new racial caste system without violating law or the new limits of acceptable political discourse, by demanding “law and order” rather than “segregation forever.” p. 40

We are, of course, living in this time when hatred hides its true intent. Reading this book is like living in pre-war Germany and understanding that one’s country is engaging in societal evil.

I have more reading notes, but you get the idea. I recommend reading this book. It’s helpful in understanding today’s headlines.

For example, Cornel West uses the term, “The New Jim Crow,” in responding to the Travon Martin tragedy.

I have bookmarked this to at least read the transcript if not watch the video. Also Alexander herself is engaged in the discussion.

Haven’t read or listened all the way through to these two links, but plan to.

I also ordered a copy of Parallels and Paradoxes: Explorations in Music and Society by Barenboin and Said. I paid a penny for it used and $4 shipping. I may have a copy of this somewhere, but I couldn’t find it. This is a discussion between two fine minds I am interested in eavesdropping on.

I’m very interested in D. T. Max’s biography of David Foster Wallace. I think that Wallace is one of  the finest writers I have ever read. D. T. Max. His last unfinished work, The Pale King, helped me understanding how to live in the chaos of modern life better. Again I purchased this for around $3 + $4 shipping. A bargain. 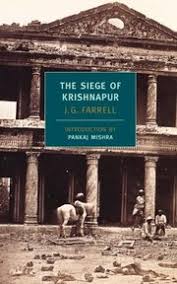 The Siege of Krishnapur is the second volume in J. G. Farrell’s Empire Trilogy. The first volume, Troubles, was an excellent read. I am new to Farrell and look forward to more excellent writing. This cost me the same amount as the Wallace bio.

I basically cleared out my “shopping cart” on Amazon this morning, spending less than $35 on all these. I love the interwebs.