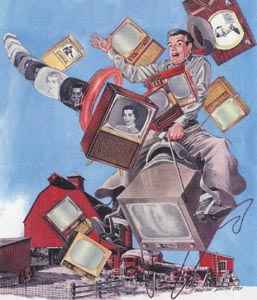 TV doesn’t seemed to have changed much since I last looked.  It’s still a bit addictive and dopey.  It still sucks up life like a sponge. I know. I know. I allow it do that. I like to think that right now it’s just the novelty of having it back in the house that causes me to turn it on.

Yesterday I figure I watched several hours of TV including 40 minutes on the treadmill.

I watched Myrlie Williams, Medger Evers widow, talk about his life plugging the book she helped edit, The Autobiography Of Medgar Evers: A Hero’s Life and Legacy Revealed Through His Writings, Letters, and Speeches (link to video).

I watched Jay Wexler wittily talk about his book and the supreme court. Very cool. He clerked for Justice Bader and is a gentle atheist interested in the topic of separation of church and state. Definitely worth watching.  (link to this video)

Finally Eileen and I watched most of “Up” last night. I have been vaguely interested in seeing it. Maybe I just wasn’t in the mood but I didn’t like it all that much. Surprising.

It was so nice to turn over in bed and kick on the internet and look up a word or a reference in something I was reading or thinking about.  I hope I can get this up and running again. It was so convenient and actually contributed to my ongoing learning such as it is.

I was amused to see that the composer, Emma Lou Diemer, left a comment on one of my old blog posts.

I had linked in to her website. I suspect her webmaster either responded on his/her own or pointed it out to her and one of them responded. Her comment doesn’t seem to directly relate to my comments about her music. She responds to my observations about her reputation among musical snobs as though it were my own opinion. She suggests I check out more of her music. After I had described the piece I was playing by her in laudable terms. Plus I have taken the trouble to learn several of her pieces, a few of which are of the highest standards. Usually a composer knows their own work well enough to recognize a gambit of achievement. But maybe not. Maybe Diemer is just as thin skinned and narrow as the rest of us dang church musicians.

Interestingly, I find that some church music composers I have spoken with seem to almost be angry with people like me (little people that is) who learn their music and perform it to the best of our meager ability on less than stellar instruments in our parishes.

I heard a friend of mine bitterly complain that so many people perform his music at workshops without preparing them well enough. No sympathy there.

I emailed David Hurd recently requesting permission to register a piece of his a bit differently than his original composition. I did this mostly out of the novelty of being able to appropriately contact a composer via email (That way he/she can ignore or respond). Also I was trying to be respectful of his intentions and courteous.

He emailed me back suggesting I not use the piece and perform a different piece of his. Which I did. Which meant that one of his piece received on less public airing (no big deal to him I’m sure). His suggestion was a good one. But unfortunately it meant that I would be repeating one of his pieces I had performed before at my church something I try not to do much of.

I have been giving thought to some composing for my August gig. I keep fantasizing about having a group of musicians playing strings, saxes, oboe, mallet instruments, harpsichord, and piano.

I think it would be fun to write at least one piece for the entire group. This means getting some commitments from musicians. So far I have three commitments from three very fine players (violin, cello, sax). Trying to build up my courage to ask some other players that I know find me a bit intense or dopey or something.

0 thoughts on “tv will drain your brains”