As one ages one looks in the mirror more carefully, I think. The wrinkles, the age spots stand out more and more clearly. The stranger in the mirror becomes a more familiar. As do his well examined flaws.

One of my flaws I have been pondering is my own sensitivity.

Although I manage to conceal my overreactions more and more, I do notice that I tend to be thin-skinned. This is probably the flip side of the coin of awareness. But it’s actually a bit more self-centered than that. 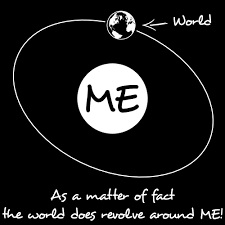 On the inside, I tend to react quickly and often negatively to what I perceive as mistreatment or slights. Also on the inside, I mull my reactions around and often find them childish or way off base.

I spent my childhood watching my father do the same thing. At least, he seemed unable to help reacting and often in negative ways.

I think learning to control my responses more has been a step toward maturing.  Rabbi Friedman used to comment on the space between an act of bad behavior on someone else’s part and one’s own response. He got me to think about that space.

Although I have gotten better, I am reminded the standard of Friedman and his teacher Bowen for mental health is never more than 80% or so and more often we act maturely about 50% of the time if we are lucky.

This doesn’t have much to do with anything other than me figuring myself out.

Yesterday was a very busy day for me. I began working on a manuscript of an anthem for the choir to learn in the next semester. About half way through I realized I was setting myself up for a large task. So I gave myself permission to not have it done by today and turned balancing my and my Mom’s checkbooks.  Then I took my weekly look at bills.

I had the borrowed dishes and glasses in the dishwasher. I planned to return them to the church after they were clean. So I had to wait for the cycle to finish. In the meantime I returned to my arrangement (Tu Solus Qui Facis Miabilia by Josquin Desprez).

Basically all I was doing was putting the notes from an online version into my music software, changing the clef on the alto part (from tenor to a more usual rendering in treble), and adding dynamics and breath marks. I found a recording by the Hilliard ensemble of this on Amazon and bought the MP3 for 99 cents.

I didn’t ape their performance. But I did feel better about interrupting Latin sentences with breaths after listening to them do so.

So I did manage to get this arrangement ready for today. I gathered up the clean dishes and hymnals I had brought for church for the choir party. Loaded up the car.

Then I remember the choir wanted to sing today’s anthem in parts if possible. The only version available (in the hymnal) did not have alto, tenor and bass parts in their copies. So I plopped myself down and did that in my music software. It took about an hour.

Then I was off to check on my Mom. She was doing better after her fall Thursday night. No broken bones. But they have ordered physical therapy for her to offset her increasing number of falls.

I went to the church after that and unloaded stuff. Then I spent a good hour or so at the copy machine making legal copies of three anthems (including the two I had prepared in the afternoon). Stuffed them in the choir slots and then practiced organ.

I was pretty tired after all this. After all I’m an old man. Heh.

Racism alive and well in the land of the free.