As promised here are my impressions of my first Alexander Technique lesson.

My first impression of my teacher was that he held his upper body oddly.

Involuntarily I looked at him with the eye of a choir director and thought, “his shoulders are tense.” I instantly saw the irony in this. Figured I was probably wrong, but did not lose the impression that he held his head and neck in an odd way.

After some chit chat, he began asked me to stand from my sitting position and then return. Then he began to lightly touch my head, neck and back. He asked me to repeat my movements. Assuring me that vitality and quickness was a good thing, he suggested I move a bit slower and repeat the action as he touched me.

He asked me to take a few steps in the room so that he could watch. Then return to sitting and standing.

I could feel a slight awareness of my neck and shoulders. A lightness. I knew I was sitting up in the position I sit as I play. Which means pretty good posture. Fatigued from the weekend I was surprisingly relaxed throughout the lesson.

We worked on sitting and standing for a while. My teacher constantly speaking and suggesting ways for me to respond. His rap was intentionally vague, I thought. Avoiding too many  concrete directions. Except in terms of thinking.

He lavished praise on me often. Cautioned me about worrying about getting it right. To just move.

After a while, he asked me to lie down on a padded table and proceeded to gently position my body.

My head was elevated on books so that it was in a natural position to my body. As he positioned my feet, legs and arms, he asked me to neither resist or assist him. 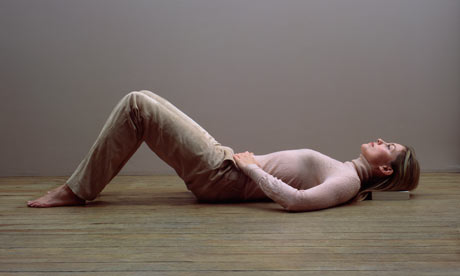 This was the point that he told me had noticed that my feet point out when I walk. I wondered when he would get to that. He said he was just offering an observation at this point. But he mentioned this as he carefully positioned my feet under my elevated knees. Clever man.

He gently suggested that if I put myself into this lying position that it was an activity. A… what did he call it?…. can’t remember the term. I remember thinking of how I ask choir members to relax but stay alert…  “up at bat” is the metaphorical image I use.

Later I asked the teacher about using images like “floating” when trying to achieve what he was asking of me (the books call this “primary control” but meaning that one is inhibiting one’s conscious direction to movement and holding one’s self… not primarily directing).

He suggested that metaphorical thinking was more assessment at the end of the process and that it could actually disturb it.

Interesting because he himself did use a metaphor for space and thinking.

His metaphor was to consider the brain or the head as though it were a house. To begin in the basement, move up to the first floor, then the second and finally to the spacious open attic.

It was in the attic that he wanted my thinking. The basement he eventually let slip was the “emotions”… the “feelings.”

Working on the table I was able to get a strong sense of space above me on the ceiling (he talked to me about silencing the voices in my head at this point) and also over my head as I lay prone.

He guided me to standing. This was funny. He said usually students do one of two things as he guides them to standing from laying on the table: they either are too active or too limp. Dead weight was the word he used. I’m pretty sure I was the latter. Heh.

Anyway, as I left the office I felt refreshed and relaxed. The lesson cost 55 dollars which seems reasonable enough. An important thing I learned is that Alexander technique is an awful lot about thinking or not thinking or even thinking “no” to ones direction as it were.

I’m chewing on it today. Pulled out some of  my AT books and will probably do the active prone position today. Maybe some sitting and standing.