My piano trio people helped me move the harpsichord to a position just before the organ bench in the little inset originally designed for the piano. The change in sound was drastic from where we had been rehearsing. I had been thinking of possibly using organ to support my singers instead of harpsichord. I guess this is still an option. However, the sound is amazing.

Plus the piece we are playing for the prelude is beautiful. It’s the first movement of Bach’s B minor violin sonata, BWV 1014.

My violinist plays the hell out of it. I can’t imagine it not striking listeners with its beauty.

This recording is a bit fast, but I chose it to share because it uses harpsichord. There are many recordings of it on YouTube using piano.

For the rest of this poem, click here.  I read this yesterday morning and was intrigued by the sestina form. 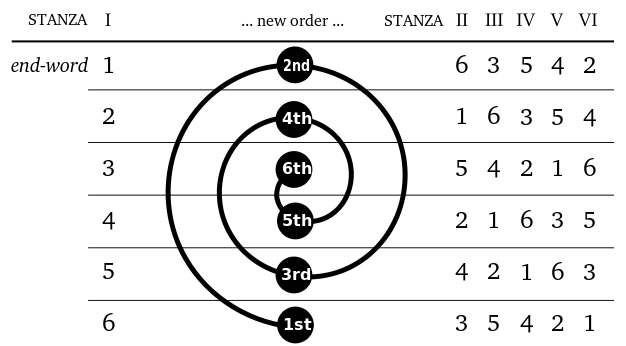 Image by Phil wink – Own work, CC0, Link
from Wikipedia: “The oldest-known sestina is “Lo ferm voler qu’el cor m’intra”, written around 1200 by Arnaut Daniel, a troubadour of Aquitanian origin; he refers to it as “cledisat”, meaning, more or less, “interlock”.  Hence, Daniel is generally considered the form’s inventor,though it has been suggested that he may only have innovated an already existing form.”

I think the form is elegant.

The poem is from the current issue of Poetry magazine (April 2018). There is also a section of poems and art by pediatric patients in four Chicago hospitals. It’s worth checking out.

Click here to see the poems and art. You have to use the slide show. Be sure to scroll down to read the poems.

This year Kendrick Lamar won the music prize. First time a rapper has done so.

I am furiously reading Madeline Albright’s book, Fascism: A Warning. It’s quite good. Hitler is one of the Fascists whose history she relates. Comey’s book is making its way to me through the mail. It’s next on my list of current affair reading.