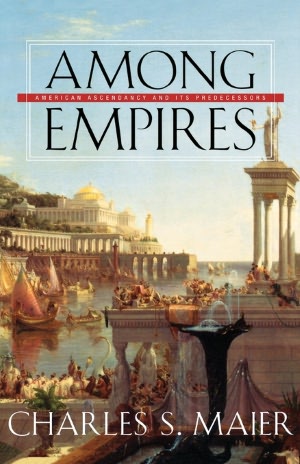 Got up this morning and after reading a bit of William Carlos Williams and W. H. Auden (“The Age of Anxiety”), I finished off Maier’s tome, Among Empires.

I have learned a lot from this book. I love the historical scope of his understanding. At the end of the book he does a fascinating description of about five thousand years of empires occupying the Fertile Crescent. Sumerian, Assyrian, Babylonian, Persian, Macedonian (which provided a strong Greek influence in the area), another Persian Empire, Judean, Roman alternating with more Persian Empires, Byzantine, Arabic Islamic Dynasty (the one that blasted into North Africa and Spain), then Turkic conquerors, Ottoman Empire, Mongols (Genghis Khan or as Maier names him: Chinggis Khan), a renewed Ottoman Empire, German French and British Expansion.

When you put American in that line, he concludes it was probably inevitable that we would at some point extend our military reach to the area.

Maier avoids the polemics that the Bacevich indulges in. I have to admit that while I find Bacevich pretty convincing, I prefer Maier’s more dispassionate historical critiques.

I found his definition of “market democracy” very eloquent. I read it to my poor wife this morning over breakfast.

Market Democracy: “... [T]he energetic and contradictory mixture developed in the United States of the vigorous local government and national plebiscites increasingly contested by candidates of great wealth, of powerful media influence often built on the cult of personality status, technological inventiveness and mass access to electronically facilitated culture and consumption, and the touching commitment to family rites asserted alongside the constant discussion of permissive sexual mores…”

This is typical of the clarity of his observations.

As I have been writing this post, at the same time, I have been corresponding with John Michael Cummings an author who has emailed out of the blue me asking me to read his book and review it.

At the same time I received an odd request to guest blog on jupiterjenkins.com from a different person about physical therapy.

As I usually do, I researched both of these requests. In the case of the author, I found corroborating info (a wikipedia site that is admittedly sketchy, plus evidence that he is who he says he is and is widely published). The fact that he was writing about West Virginia, an area with which I have fond ties, intrigued me. I emailed him that I was considering it and we have just gone back and forth in a pleasant couple of emails, chatting.

A quick check of the latter email looked very dubious. Pretty sure it was sent by a robot. Delete.

I have found that online conversation works, but only in certain situations. I have a colleague in Chicago I have never met in person. But due to our common interest in pipe organs and music, we have had a fruitful connection online for years. I have had online conversations with authors and composers whom I have never met in person. This feels like good old pre-interwebs correspondence. Cummings seems to fall in this latter category.

Other than those sorts of connections with people, I find the social media stuff a good supplement to actual in the flesh connections. Without that, I find it not very interesting or even credible.

Not sure what I think about this. In the case, the teacher was dismissed for claiming a disability through government channels instead of church channels.

Mississippi – Some Pardons by Barbour Are Halted – NYTimes.com

I have been following this, since in almost all cases I approve of acts of mercy.

These two links are about fraud.

I read this lovely sentence in Auden this morning:

“Human beings are, necessarily, actors who cannot become something before they have first pretended to be it; and they can be divided, not into the hypocritical and the sincere, but into the sane who know why they are acting and the mad who do not.”

Use the last link to see some (but not all) of the greenhouse gas produced in your very own U.S.A. area.

The Value of Teachers – NYTimes.com

Kristoff is making an economic argument for good teachers. I think they have intrinsic value (as I’m sure he does).

Should The Times Be a Truth Vigilante? | The Public Editor – NYTimes.com