You have your heritage. I have mine.  I was going through the box of stuff that got wet on the porch and found this old mimeographed program from Christmas 1960. I would have just turned nine that year.

This must have been a special music event at my Dad’s church. I recognize names in this program.  Louis Reppetoe read from the second chapter of Luke. Her son, Ray, was about my age.  He was killed in Vietnam. I also recognize the name and have a face for the man who did the prayer: Jim Luttrell.

Choir members listed include my Mom. Mary Snowden lived near where the new “parsonage” was being built… more on this below… I was friends with the Snowden children whose names escape me, but I can see their faces.  Maxine Humphreys is still alive. She called when my Dad died. She was and probably still is a local radio announcer in Greeneville, Tennessee.

Learline Waddell was the mother of my best friend, Reggie. Ralph was his Dad. Blaine Waddell (who apparently wasn’t in the choir but was one of the Three Wise Men along with Ralph W. and Jim Smith) must have been Ralph’s brother. Blaine’s son, Jerry, was my other buddy at this church. Reggie was the smart one of the three of us and grew up to be a dentist.  According to a quick google search he lives in Knoxville, Tenn now. No pictures online unfortunately. Heh.

Jim Smith was a legend of my childhood.  I can see him. A big man with surprisingly skinny legs. Tobacco farmer, I remember him driving his son, Randy, and me in his jeep around a Tennessee mountain on a muddy trail in the woods yelling and honking his horn. Louise Parman was regular weekly church organist. Her husband, Clark, was the town barber.  His shop was not far from the church.  Apparently someone named Cecil Raby who I do not remember helped out with accompanying this evening.

This is the back of the program. Yesterday I searched in vain for an MP3 of this song. I did however find this: 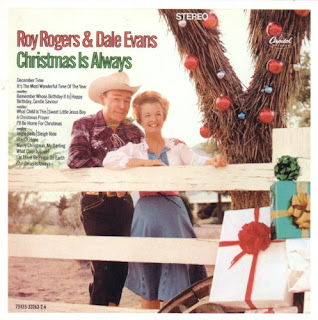 The song is on this vinyl record.  Amazon lists the cost of one new as $114.98 and one used at $49.99. Who knew? Thars gold in them thar thrift shops. I’m sure I’ve seen this in a thrift shop in the last few years. I would just like to hear this song.

My Dad undoubtedly had a strong hand in this Christmas program. It’s likely he organized and conducted the whole thing. The program itself was his work. Like his father he was a mimeograph guy.  He even had a handy dandy little contraption which would shine the light up behind the blue mimeograph sheet. The picture is him around 1954 some years before the program. I would have been three in 1954. In another box I found Dad’s Christmas sermon from 1960,  the same year as the “Christmas in Song” concert.

Dad left behind hundreds, thousands of sermon outlines. A few years before he died, with his permission, I went through them and salvaged ones that I thought I might want to look at again. They are full of interesting stories and references to contemporary events. At least I find them interesting.

Notice the stories on this page.  “I remember in my own home…” tells the family story of my Uncle Dave running through the hall yelling about Dad’s birth.  Further down on the page tells the story of my Dad discovering that people in Tijuana were sometimes named Jesus. Note the Freudian slip of the “m” in “the(m)Mexians.” And the attribution of Jesus as a name from the “strong Roman Catholic influence.”   This was a time in my life when my Dad like most in his denomination viewed Catholics with suspicion.  In three years he would vote against JFK because he was worried about the “strong Roman Catholic influence.” Happily in 8 or 9 years he would bloom into a full fledged dang liberal after spending a few days living on the streets of Chicago. But that’s a family story for another time. Heh.

This picture dates from 1966 when Dad was working in Flint Michigan. But back to Greeneville.

In 1961, the church built a house for Dad and his family to live in.  I remember this house well.  Of course it was time for another “special” service.

The newspaper clipping and this program were also in the damp box.  “Parsonage” is Churchagod for the house the preacher lived in.  It appears that the congregation gathered in the church and had a service. Then drove out to the house for a reception. I have no memory of this, of course.

But I do remember these people:

The copyright date is 1966 on this piece of music. Copyright held by Bill Gaither.  Gaither and Doug Oldham were Churchagod legends from my childhood. I met each man and each man disillusioned me from working in church music in the Churchagod (“Church of God” “movement” headquarters still in Anderson Indiana the city where I was born while my parents were attending the church college which is still there).

You can see I awoke in a perverse mood.  I’ll close with the scripture that good old Doug notated on my Dad’s personal copy of the music (Lucky Dad, Hell, lucky me.)

“And we know that all things work together for good to them that love God, to them who are the called according to his purpose.”

Romans 8:28 in the King James that no doubt Doug would have referred to at that time.

One thought on “jesus who or lucky me”