So I was reading in an old Clavier magazine (not that old: April 2006) that my sister-in-law was kind enough to give me and ran across an article on Rene Touzet (I think that’s him in the back of this photo at the piano) with an accompanying little dance by the same.

I sat down at the piano and played through it and thought it was kind of neat. Very rhythmic. So I checked Touzet out a bit. It turns out he’s kind of an interesting musician. He was Cuban and played in Desi Arnaz’s band. 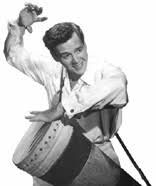 Not only that, but that he actually was responsible for the riff in Louie Louie. It was stolen from him from his song El Loco Cha Cha.

Now I was starting to get interested. He died in 2003. Around 1973, he moved from Hollywood to Miami to “be closer to Cuba.” Apparently as an old man he spent a great deal of time writing piano music.

After extensive googling I could only find one place to purchase his music and that was a store in Coral Gables.

I got the number from the official Rene Touzet web site.

I called the store in Coral Gables this morning. When I told the person on the phone how hard it was to find Touzet’s music, he said that he thought they might be the only source for it in the world. It seems that Touzet basically published his own music and when he died, his widow (who is still alive) brought all his music to this store so they could get rid of it.

The clerk on the phone said he had had a couple of orders in he last couple of months, one from Japan and one from some other place. I ordered some music.