I recently purchased the complete Caedmon collection of Dylan Thomas reading.  The record company seems to have formed at the time the two people whose brainchild it was (Barbara Holdridge and Marianne Roney) were inspired to begin recording Dylan Thomas.

I like to think that one of the reasons I like Dylan Thomas so much is that I purchased a record (not the one above) of him reading when I was young.  This collection includes that record. I still own the vinyl but I am very happy to get this collection and hear Thomas read tons of stuff.

The collection consists of eleven CDs. I ripped them all last night and used my MP3 player to listen to several during the night.

Under the influence of this I dreamed I was sitting and listening to a poet read his work on the streets of New York City. In the dream I was so moved by his words that I wept. 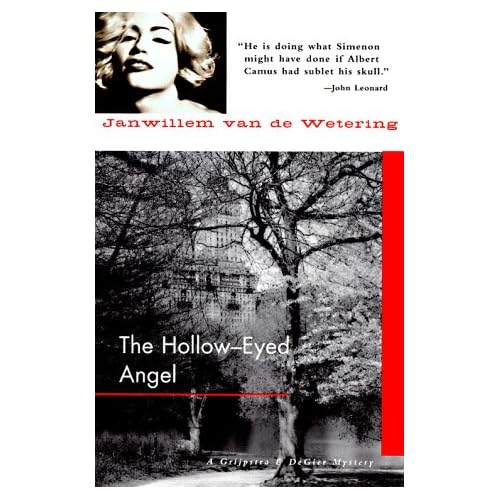 Before retiring last night I finished reading The Hollow-Eyed Angel by Van de Wettering. I have read many of these mysteries and also some of this writer’s non-fiction. These are mysteries with a Zen twist. Three Dutch detectives (they were originally written in Dutch) , a commissaris  and two adjutants, seem to view their work through the prism of Zen thinking.

How does that work you might ask? Very well, actually. When I read mysteries I sometimes recall Gertrude Stein’s fondness for them.

The mystery plot is usually a foil for a succinct ritual that unfolds a bit differently in each case. Still its pacing and context provide a mind numbing sort of comfort that is not far from a good movie or TV show.

Van de Wettering has drawn me in for years.  Here’s a story from the one I finished last night:

Central Park, Hurrell said, was known for its begging squirrels. Squirrels had learned to sit up for peanuts, and some had even mastered the art of shaking hands.

And Central Park was also known for its rats. Rats looked like squirrels; their lack of plumed tails was not noticeable when they faced little old ladies. Rats liked peanuts, too, he said. Rats had learned to join squirrels when little old ladies handed out peanuts.

So many little old ladies had been bitten by rats that another admonition was to be added to the park’s notice board:

Today is my first choir rehearsal. After I developed a plan yesterday, Eileen helped me photocopy (legally) and assemble several anthems in preparation for this.

My next pressing deadline is Tuesday evening. That is the first meeting of what I have dubbed the Grace Electric Light Orchestra. This is simply an ill-disguised ploy to try and get people who play instruments to come out and learn some music to use at service.

My task will be to have music ready for a wide array of skills. I am planning to arrange my new Holy and the closing hymn for the following Sunday. I guess I will be working on that tomorrow and probably Tuesday.

Today’s post church task will be to make my last batch of pesto for Emily’s wedding.  I bought basil at the farmers market yesterday and it awaits me in the fridge.