As I reached for my copy of Edward Naylor’s An Elizabethan Virginal Book, the phrase, “catching up the past,” went through my mind. Although this book was originally published in 1905, I still think it might have insights for me.

After catching up a bit on William Carlos Williams and Walt Whitman this morning, I pulled out a volume of my old Fitzwilliam Virginal Book (the subject of Naylor’s book) and began playing in it. 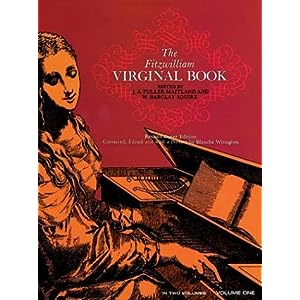 The music dates from over a hundred years before Bach was born. It’s beauty and cleverness still holds my attention. Once again I am impressed how little squiggles on a page are sort of a secret message from people who lived and breathed centuries ago.

I originally purchased this volume and a volume of Bach’s harpsichord music as I was putting together my harpsichord kit. I find it satisfying that this music still draws me in and holds meaning for me decades later.

A section in Paterson which struck me this morning seems appropriate:

A WORLD OF ART
THAT THROUGH THE YEARS HAS
SURVIVED!

-the museum became real
The Cloisters—-
on its rock

As I read this in Paterson, I thought of the idea of an existing canon of art that is somehow permanent (an idea that I find myself resisting as I realize how ephemeral the whole idea of humanity is in the eyes of the universe). But I like the idea that some stuff survives. And that it informs our experience now in a way that relates to the original creators and their audiences.

This leads me to another section of Paterson I came across this morning:

Death
has no peer:
wandering in the woods,
a field crowded with small flowers
in which the wounded beast lies down to rest     .

We shall not get to the bottom:
death is a hole
in which we are all buried
Gentile and Jew.

The flower dies down
and rots away      .
But there is a hole
in the bottom of the bag.

It is the imagination
which cannot be fathomed.
It  is through this hole
we escape    .     .

WordPress doesn’t seem to want to let me do the indentations that Williams put into this poem (as it has refused to do so in the past). I mention it because it did allow me to put space in the periods which are Williams’ original.

Anyway…. I love the idea that both death and imagination are holes at the bottom.

The Reign of the One Percenters | Christopher Ketcham | Orion Magazine

Fascinating diatribe most of which makes sense to me. I liked this:

“… [P]attern exhaustion, … paleoanthropologists define [it] as that moment in Stone Age societies when the patterns on pottery no longer advance. Instead, old patterns are recycled. With pattern exhaustion, there can be only repetition of the great creative leaps of the past. The culture loses its forward-looking vision and begins to die.”

Sounds suspiciously like a lot of stuff I see around me these days.

This guy keeps on keeping on. Inspiring to me.

Charles Blow: “Government is not the enemy. Not always. Don’t believe that right-wing malarkey.”

Arms and the Corrupt Man – NYTimes.com

Update on arms dealers in the world.

Nixon continues to fascinate me.

Morris Philipson, Who Led the University of Chicago Press, Dies at 85 – NYTimes.com

Another obit.  I admire the U of Chicago press.