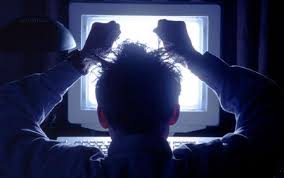 How much time in the last thirty or so years have I spent staring at a computer screen waiting for some engineer’s nightmare of a scheme to load up?

Back in the day of modems, I used to grab the paper and sit at the computer and wait for the processes to complete.

For a while this seemed to improve, but now I’m back to watching a screen do nothing. 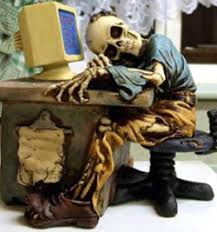 I hear it from operators on the phone as well. After I have made my way through some damn phone tree of options and finally make it to a human being, they take the information and there is the usual pause.

“Waiting for it to load.” 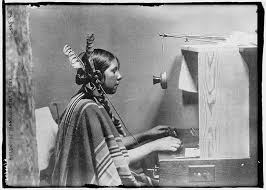 I made it through Wednesday.

Wednesday is usually my hardest and longest day.

Yesterday was up and at helping Eileen prepare brownies for a good by treat for a worker at her job.

In fact they weren’t done baking when it was time for her to leave for work so I finished them up and cooled them and brought them to her.

Then to staff a church.

My daughter Sarah put up some photos on Facebook yesterday (Hi Sarah!).

One of them captured my mood about this time of year:

It’s complicated. And a trap. I think it’s a fake trap.

Over a christmas tree.

After staff meeting I came home and grabbed something to eat, then went back to practice and prepare for the evening rehearsals.

I’m learning Les anges by Messiaen. I think I’ve mentioned that here before. My friend and colleague Rhonda Edgington performed this particular piece Sunday at her Advent recital.

I’ve been trying to understand what mode Messiaen used in this piece.

In the little introduction to all nine movements of the Nativity suite (of which Les anges is one) Messiaen lays out in quite some detail a synopsis of his modes and even mentions some of the movements as examples.

During the Wednesday church dinner as I waited for Eileen to get off work I figured out which mode of Messiaen’s it begins in.

I also noticed that it uses a bit of his mode 1 as well. The rest of us know this as the whole tone scale.

Not sure how important this sort of thing is to performers. But since this piece is largely scalar throughout and he neglected to mention it in his introduction I was curious.

I think these sort of compositional self imposed limitations serve a couple of functions. First I think they assist with underlying subtle coherence that contributes to their beauty. Secondly I think they provide a strict parameter for the composer which allows him or her a certain freedom as well as a kind of distraction from the creating process. 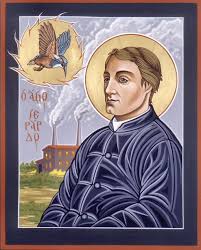 I am reminded of these words about Gerard Manly Hopkins I read this morning.

The truth of the matter is that the poems do not require half the explanation Hopkins gave them, and to tell a further truth, he elaborates in such detail that it becomes finally obstacle rather assistance.

Mary Oliver, “The Poem as Prayer, the Prayer as Ornament: Gerard Manley Hopkins” in Winter Hours

That’s the trick really. When does information and technique cease to be helpful and become obstacle?

Weirdly, I turned from this essay to read a poem by my beloved Adrienne Rich. And there was Hopkins in the middle of it.

You’d spin out on your pirate platter
chords I’d received on my crystal set
blues purpling burgundy goblets
Lorca’s piano spuming up champagne flutes
could drop over any night at will
with that bottle of Oregon Pinot to watch Alexander Nevsky
if no curfews no blackouts no
no-fly lists no profiling racial genital mental
If all necessary illicits blew in
like time-release capsules or spores in the mulch
uprising as morels, creviced and wild delicious   If
Gerard Manley Hopkins were here to make welsh rarebit
reciting The Wreck of the Deutschland to Hart Crane in his high tenor
guessing him captive audience to sprung rhythm   as we in lóst lóve
sequences hearing it
skim uncurfewed, uncowled
pelicans over spindrift beating agnostic wings

If you’re wondering what Dick Gregory and Tom Smothers have been up to lately.

IPhone Leads Drivers to Middle of Nowhere in Australia – NYTimes.com

I’ve been told this can happen right here in the good old USA.

With every step to correct earlier mistakes, he said, “they make a bigger mess.”