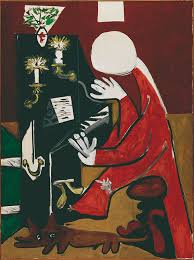 I had to phone Julie, the teacher I work with, last week to confirm this schedule. She told me what it would be last term, but I only had it written down on a sticky which I promptly lost. She asked me if the chair of the department had emailed me and I said to the best of my knowledge that she hadn’t. No biggie. I have long since adapted to this particular department’s way of doing business.

Church went fine yesterday. It was the first curate solo (soli?) Sunday. Jen’s taking some well deserved time off. It seemed that despite the fact that people were standing close by me and talking the prelude came off well. Funny how I can sort of read the choir as it gathers to process. I got the impression that they understood and approved of my little prelude which consisted of a Pavanna and a Galliarde by William Byrd.

While I’m thinking of it I’ll mention that the person who proofs the bulletin decided that “Wolseys Wilde,” the title of my postlude, was a grammatical mistake and put an apostrophe in it. This is a matter of continuing differing vision of what constitutes accuracy between me and a retired English prof. If something looks wrong to him it trumps the possibility that what he is looking at is intentional and more correct. In this case he was about half right. While the title in the Fitwilliam Virginal book has no apostrophe, in its index there is one. I had a little surprise during the anthem. Just before church, I asked Eileen to go get me a second copy of it so I could use it for a page turn. I laid the two copies out as I usually do so that I could see the entire anthem without turning a page. Unfortunately this was after our rehearsal of it.

During the performance I noticed that the ladies did not enter when I expected them to at one point. I improvised an extra measure or so and they came in fine. As I was playing and conducting it occurred to me that the two copies of the anthem were not the same in their pagination. Yikes. I began carefully counting measures as I played and managed to do the rest of the piece with no train wreck.

The only other thing that sticks out was Jodi’s comment in her homily that in “just a moment we are going to do the Episcopalian version of an altar call.” I could only laugh quietly.

This is about “Stefan Simchowitz, the controversial 44-year-old movie producer, Internet entrepreneur and industrial scion who over the last seven years has pursued a manic quest to assemble the world’s most lucrative collection of emerging contemporary art.”

Interesting approach to collecting art. Discouraging that everything is about how much money it’s worth but I guess that a sign of the times.

Asia Times Online :: War by media and the end of truth

This talk by John Pilger was given at the  Logan Symposium, “Building an Alliance Against Secrecy, Surveillance & Censorship”, organized by the Centre for Investigative Journalism, London, December 5-7, 2014.  It puzzles me. Sometimes he seems to be accurate and incisive in his criticisms. At other times he seems as vague and unsubstantiated as the people he is criticizing. I found this article on EastSouthWestNorth which seems to be a renegade Chinese web blog. I bookmarked Pilger’s website to keep an eye on. Who knows?

Paris Review’s end of the year compilation of essays.

So the US has no corner on the market for nutty politicians.