Yesterday was the first day of mild weather we have had this year. Eileen washed her car.  I sat outside and read poetry and my Charles Ives bio. Later we opened windows and let the lovely breeze air out the house.

On Saturday I finished The Laughing Policeman by Maj Sjöwall and Per Wahlöö. Written in the sixties, it’s a classic police procedural murder mystery that takes place in Sweden.

I started another Swedish mystery. 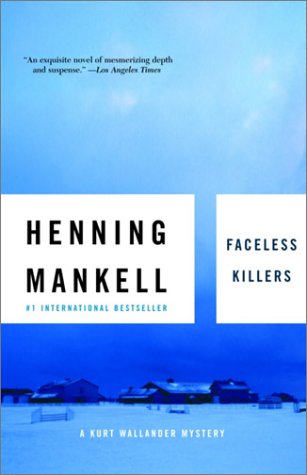 This kind of reading is strictly escape reading for me.

Church went well yesterday even though I was definitely not in the mood for it. The choir was less of a challenge behavior wise. They sang a Bach chorale setting of “Out of the Depths.” This is a Martin Luther rendition (German words and melody) of Psalm 130 which was the psalm of the day for the service.  The organ music was also based on this melody: The prelude was “Out of the Depths (Jesus in the Desert)” from “Three Gospel Scenes Quoting Familiar Hymns” by James Biery.

The Postlude was a passacaglia like variation on the first few notes of the melody by the late German composer, Max Drischner.

Both went well.  After church, a talented soprano decided to join the choir for a while before she moves away and joined us for our post-service rehearsal. That was nice.

In his book on Prokofiev, Boris Berman suggests that Prokofiev’s first piano sonata is written in the spirit of Schumann’s G minor piano sonata.

I have been playing my way through this piece. I find it quite lovely even though I am playing it under tempo in order to get the notes. Berman even goes so far as to say that they are motivically related. I can see this, but not sure that it’s a result of Prokofiev borrowing so much as sort of a basic building block of music.

Eileen pointed out to me that the communion hymn, Thuma mina, sounded like the Pulkingham Kyrie we have been singing. Pulkingham says only that she based her melody on African melodies (of which Thuma Mina is one).  Both melodies begin with a filled-in descending fourth and proceed pretty much the same.

For my money, Kristoff hits it right on the head. Our leaders are acting badly. A plague on all their houses.

The Prosecution Rests, but I Can’t – NYTimes.com

An essay from John Thompson. He describes what it’s like to almost be executed and then watch the people responsible for screwing up walk away with no consequences. The Supreme Court recently reversed the case which awarded him damages.