So I’m sitting in my son’s dining room in California. We had a pretty good trip with a layover in Houston Texas. My daughter-in-law picked us up with my 3 grand kids in tow. Eileen had a head-ache and sensibly laid down for a nap, which is where she still is.

I already had a chance to drive through the lovely hills here in Corona. My daughter-in-law went to the tire store and then needed me to come pick her up. This country is beautiful.

I bought a copy of the New York Times. Usually I read this online, but it’s kind of nice to have a paper copy when traveling.

I enjoyed this article about 88 pianos decorated and installed on the streets of New York City. 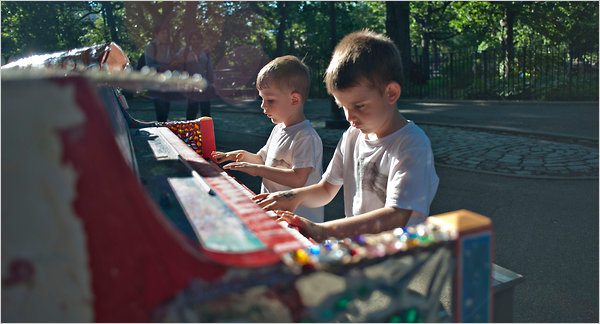 Here’s some links I made for vacation reading:

The Kingdom and the Towers | Politics | Vanity Fair

This is one of those articles that speculates about extending the 9/11 hijackings origin to possible countries like Saudi Arabia. I don’t put much stock in it, but it’s good vacation brain-dead entertaining reading.

My Summer at an Indian Call Center | Mother Jones

What it’s like to actually be at one of those call centers in India.

about the advent of silent reading

negativity at The New Republic

Guernica / With Their Heads in Their Hands

regarding “the company of saints known as cephalophores: the head carriers.”

When I was twenty years old, and a college student, I defaced a portrait of Chairman Mao. For this act, and without a trial, I was declared a political prisoner and sent to a forced labor prison on Taihu Lake, where I served in a labor reform brigade in a stone quarry for seven years: five years in the labor prison and two years as an ex-prisoner laborer.

Guernica / Down and Out in the Magic Kingdom

A Disney intern tells all.