Got up and emailed an old friend now living in Florida. Actually I “messaged” her on Facebook after she “confirmed” me as a “friend.” It has been very gratifying how many people I have recently reached out to on Facebook have responded.

Have been regularly walking up to LemonjeLLos to read and compute.

Reassessing my almost complete lack of connection to local people. I noticed when I first moved here in ’87 that I had many fewer music contacts than when living in Detroit. My attempts to remedy this have met with mixed success.

From the first, local Holland church musicians & Hope college people had a problem with me.  These faces have changed but I seem to remain largely on the outside of these situations. No brag, just fact.

It occurred to me that it might be playful to reach out to some of these current people through Facebook.  I have been selective about whom I reached out, emphasizing as usual musicians and people interested in ideas.

As of this morning I count 22 new “friends.”  Two more people seem to be on my Facebook feed even though they don’t show up on the “friend” list. That would mean that only 4 people so far have not responded to a request for connection.  Surprising.

Since recently reading Juan Diaz’s new short story in the New Yorker, I have been working my way through his collection of short stories called “Drown.” 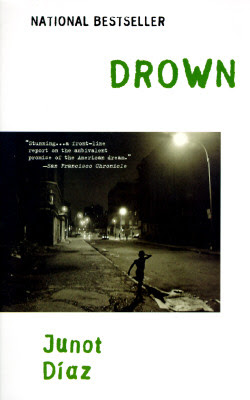 It is riveting stuff to me. I read the title story last night in which a young man is working through the feelings of being sexually approached by his closest friend. All of this in a context of extreme urban poverty and violence. It amazes me what Diaz does not only with a believable story but with lilting unpretentious language. This guy rocks.

I was disappointed when I was handed this book at the library and it was so small. I loved his “Underworld” which sprawls out for hundreds of post modern pages.

But I am finding this book much much better than “Falling Man.”

“The door slid open and there as a stir of mild traffic at the far end of the floor, people getting on the escalator, a clerk swiping credit cards, a clerk tossing items into large sleek museum bags. Light and sound, wordless monotone, an intimation of life-beyond, world-beyond, the strange bright fact that breaths and eats out there, the thing that’s not the movies.” Delillo

“The true life is not reducible to words spoken or written, not by anyone, ever. The true life takes place when we’re alone, thinking, feeling, lost in memory, dreamingly self-aware, the submicroscopic moments.” Delillo

The true life. The thing that’s not the movies. Not even reduced to words spoken or written….