Ray Kurzweil uses the story of the person who invented chess to illustrate the onrush of the future into our lives. McChesney/Nichols quote him and the story in People Get Ready.

In the sixth century in India, an inventor presented the game of chess to the local emperor. The emperor was so impressed that he promised the inventor any reward he wanted. The inventor asked for grains of rice to be granted in the following way: one grain on the the first of the 64 squares of the chessboard on the first day, 2 grains on the 2nd day and square, 4 grains on the 3rd, and so on, doubling the amount each day and succeeding square. 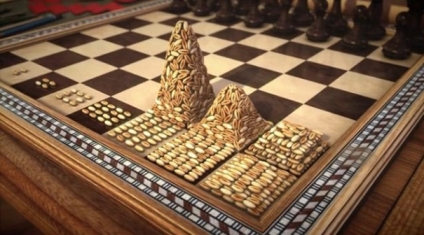 “By the time one got to the sixty-fourth square, the number of grains would be eighteen quintillion, vastly more rice than has ever been produced in history.” (Nichols/McChesney, p.89) Moore’s Law proposed in 1965 is that computer power doubles every eighteen months. In this story, McChesney and Nichols propose that we are now entering the second half of the chessboard. In the story when the emperor theoretically got that far, the total was “four billion grains, about one large field’s quantity.”

The automation of jobs feared in the sixties is happening now.

At the end of 2014, “former Treasury Secretary Lawrence Summers stated that he no longer believed that the automation process would create new jobs to replace the ones it was eliminating. ‘This isn’t some hypothetical future possibility,’ he said.’This is something that’s emerging before us right now.'”

You get the picture. It’s something to think about.

What if the cost of machines that think is  people who don’t?

I love these articles that analyze new coverage. This one is once again about something in the  NYT. Bookmarked to read.

These are transcripts of this weeks CounterSpin podcast. Excellent and informative stuff.

This is the second weird thing I have seen recently in connection with Vox. I am growing skeptical about this source.

Woolly Wolf Spotted in Nepal Is Likely a New Species

This is not breaking news according to the article, but I think this sort of thing is fascinating.

The Retreat From Voting Rights – The New York Times

This stuff makes me crazy. Judging from the comments not everyone things the universal franchise is important to a functioning democracy. I think it is.

China says it will not permit war in the Korean Peninsula. Why now? – CSMonitor.com

This is an interesting development. China is in a position to help North Korea not go bat shit crazy. And of course everyone hates the USA.

this is his blog. I check it once in a while.