This will be another short blog. I got up early to work making scores for the string players for this Sunday. We meet this afternoon. Before that I have a dentist appointment and a meeting with my boss. So I need this time this morning to work.

I have had a weird relationship to the New Yorker for most of my adult life. When I was in high school (that would be the late sixties), I had an English teacher named Mrs. Stormzand. She taught us Capote’s In Cold Blood. She told us that she had read it as a serial when it was first published in the New Yorker. She talked about waiting at the mailbox for each issue to arrive.

She also read one book a day in the summer. This is my first memory of learning about The New Yorker. Later as a young man, I sent many poems to the magazine in hopes of being published. I would write the prerequisite cover letter for these and dutifully enclose a stamped envelope. Like clockwork, the envelope would be returned with my manuscript and a charmingly designed rejection notice.

Once, in response to my pathetic pleas for comments, a reader penciled on the notice “We can’t comment, but we do read with care.”

Of course, I never was published by The New Yorker. I did get some other poems published most notably in the back pages of The Rolling Stone.

Over the years, I have had subscriptions to The New Yorker on and off. I hate their approach to online access. They use a graphic interface that is annoying and useless for jumping around in the magazine.

As I try to get myself to rest up on Wednesday afternoons for the evening choir rehearsal, I have resorted to saving the week’s New Yorker to read or should I say look at the cartoons.

I also listen to their podcasts regularly. Last night, I listened to “Pardon Edward Snowden” by Joseph O’Neil. Here’s a link to the story. There’s also a recording of him reading it. I think it was last year that they began offering a recording of the weekly fiction piece by the author. I think this is a funny one about poets, email, Bob Dylan’s nobel prize, and professional silliness.

Yesterday I was tickled to see an article by a writer and admire and read and who writes music columns for the New Yorker: Alex Ross.

The Book of Bach

Ross writes about John Butt among other author/musicians about Bach. His description of the St. John Passion led me to fire up my Naxos subscription and listen to Butt’s fascinating recording while studying the score. It’s an amazing recording. 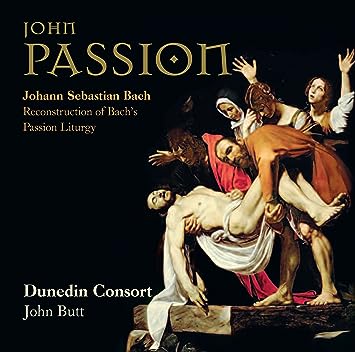