I was thinking this morning how the majority of the gay people I know are in the closet. Yikes. This makes me very very sad. But flattered that they come out to me, anyway.

After blogging and exercising yesterday, I went into my basement to discover a few inches of water covered the floor.

I waded over and made sure the drain was clear. Oy. By mid-day about half of it had drained away. This morning all I have is damp floor. It’s still a mess needing to be cleaned up (there is carpet over most of the cement floor that will probably have to be taken up and discarded).

One of my my many unrealistic summer projects was to clean out all the crap in the basement. Throw most of it away and organize what is left so that when my kids come home they can see their stuff (and hopefully deal with it).

So a flooded basement speeds me on my way.

I worked a bit more on my composition project for the Roman Catholic group.

Rehearsed with Jordan. Yesterday we finally did a bit of the Desenclos sonata I have been thinking about compositionally as well as tasted Lars-Erik Larsson’s Sax concerto and John C. Worley’s Sonata for alto sax and piano. I find Larsson’s writing engaging and Worley’s writing a bit hokey. (Remember this comes from an old guy who not only bought sheet music for the “Theme from Peter Gun” and “Perry Mason,” but has ordered a book of Queen music)

All of this material is new to me. It comes from the world of saxophone and I am finding it fun to get a glimpse into how a bunch of new music works. 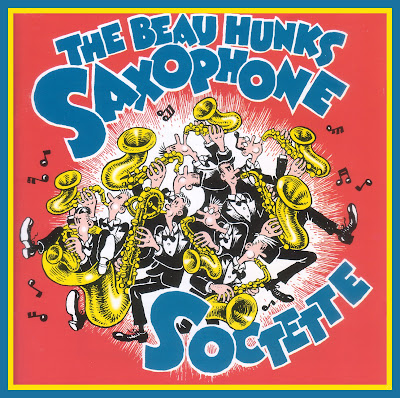 Oh yes. We decided to work up the third movement of Milhaud’s Scaramouche (suite for sax and orch) called “Brazileira.”

Brahhhhhzilllll. Oh. That’s a different piece. Anyway, this is a very cool little samba and will do nicely for the offertory in a couple of weeks at my church.

This morning I am playing two little elegant pieces for the prelude and postlude.

The prelude is a trio based on NETTLETON (Come thou fount) by Aaron David Miller. “Come thou fount” is this morning’s opening hymn. Very appropo actually due to the fact that the church along with half of western Mich had seriously flood damage this weekend.

The postlude is the toccata from a piece by Wayne Wold based on MELITA (Eternal Father, Strong to Save). It’s a bit tricky in places. I am hoping I can perform these two pieces a bit under tempo and do them accurately. That way if anyone bothers to listen, they make a bit of sense.

I have discovered a new poet. Or at least have been introduced to one.  I recently had lunch with two composer friends of mine.

One of them I was meeting for the first time, Tim Schrems, and when he discovered I liked poetry he launched into a description of the poetry of a man named James Richardson.

I bought a collection of his poetry used called “Interglacial.” This is the first poem. I like it.

The way an acre of starlings towers and pours
rapidly through itself, a slipping knot,
landing so few feet down the furrows (the whole skywriting
like a secret no one knows they have given away)
is one of those breathtaking wastes
(sun and the seeds they feed on being others)
in which something senseless, even selfish, absurdly magnified,
becomes grandeur (love is another).
Sometimes the flock, banking in unison,
vanishes an instant, like a sheet of paper edge-on
(a secret, anyway, is the illusion
confessing it would make a difference).
I watched this happen once – two seconds, hours –
till I understood no kindness, not a shadow or stone.
And they did not come back,
though I waited all evening (and it was you
I waited for). Though the sky turned black.