I had another connection with a musician I knew in high school via Facebook. I know that Facebook is evil, but what isn’t evil these days? I do like connecting with people from the past. Especially if they have any vestige of the passion they had when I knew them.

Speaking of passion, I had  a great rehearsal with Jordan the sax guy yesterday. We worked on the Bach sonata we are learning (BWV 1020). I am having a jolly old time talking Baroque interp and editing with Jordan. We also ran through the second movement of the Decruk sonata.

I also picked out a couple of organ ornamented choral preludes which I think would be cool on the sax with piano accompaniment. I am pointing Jordan at these because I think I learned a lot of the logic of baroque interp and diminution (the practice of stylistically adding notes in the manner of the baroque musician) from playing these kinds of pieces.

My brother Mark left yesterday. But not before we had some nice chats and one last check in with Mom. She is putting up a heroic struggle with depression. I am very proud of her. I cannot imagine the effort it takes to keep getting up, getting dressed and moving when one’s motivation is so oppressed.

I continue reading in Mao: the unknown story by Chang and Halliday and The Robert Shaw Reader edited by Robert Blocker.

I am reading or re-reading Anthony Burgess’s opus. I finished A Vision of Battlements by him. I am trying to read his novels in roughly chronological order. I have owned most of them over the years but was forced to order a cheap copy of The Doctor is Sick yesterday.

I received Stieg Larrson’s second volume in his Millenium trilogy, The Girl Who Played With Fire in the mail yesterday. It should be good escape reading.

I also have been reading Freaks Talk Back: Tabloid Talk Shows and Sexual Non-conformity by Joshua Gamson and Ada by Nabakov on my ebook. The first is the June free e-book from U of Chicago. They are giving away an e-book a month. I like reading my netbook while treadmilling. It props up easily on the music stand I put in front of the treadmill and is easy to see.

I find the Freaks Talk Back very interesting. 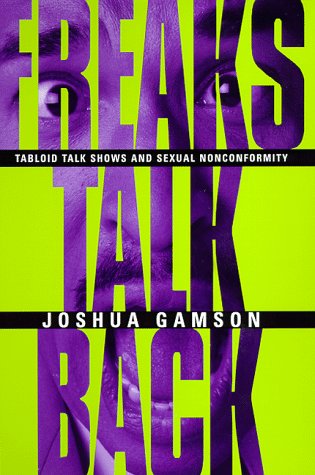 Gamson has pointed out that much of the criticisms talk shows receive are actually directed at the people who come on the shows. This fascinates me because it never occurred to me to be repulsed by the outsiders on the tube. I am repelled by the people who moderate and profit by them. Of course, Gamson also talks about the damage critics insist such entertainment is doing to its audience and our society.

I have listened to the quick analysis of just what is causing many of the problems of violence and diminishing literacy and you name it. Usually I am struck by the reductionist aspect and lack of insight of such shrill comments, even as I lament the striking and sad behavior in our society of the angry and illiterate.

But Gamson is fun to read. And it’s free on the web. Cool.