Here are some quotes, scant comments and links for some stories I read this weekend.

Republicans are trying to draw Democrats into a screaming match because they know they’re better at it. They are the masters of shrill — masters of stoking ignorance and rousing rabble.

Democrats, on the other hand, should know better, especially No Drama Obama. He comes across as much more competent when he appears unflappable. That’s part of what inspires so much confidence in him, and confidence is all people had to go on with the stimulus bill. (I’d bet dollars to doughnuts that virtually no one read the entire tome.)

Not sure what to think as I watch the people inside and outside the beltway these days. It was around this period in Bush’s first hundred days that I wrote a letter to him thanking him for attempting to bring civility to DC. Boy was I wrong about that.  But I’m sure it’s swimming upstream anywhere in the U.S. to oppose much less make a dent in the current culture of fear and anger.

I find it troubling that people demonize each other as they disagree. A recent letter in the local Holland Michigan paper (The Holland Sentinel) told this story:

Two first-graders, whose parents are relatives and friends of mine, both came home from school a couple weeks ago and said, “Mom and Dad, my friend said that President Obama is a baby killer!” Each of these children was very upset and did not understand what her friend meant. These parents had the difficult task of explaining abortion to their 6-year-olds. Tricia Bartells letter to the editors of the Holland Sentinel 2/6/09

I know people feel deeply about the issue of abortion. But I don’t think that aleviates the grown-up responsibility to treat everyone with a modicum of respect. Even us babykillers.

WHEN former Vice President Dick Cheney warned last week that terrorists will be emboldened by President Barack Obama’s decision to close Guantánamo and to ban harsh interrogation techniques, I was reminded of a story.

During wartime service in Vietnam with the C.I.A. from 1970 to 1972, I was in charge of intelligence operations in the 10 provinces surrounding Saigon. One of my tasks was to prevent rocket attacks on Saigon’s port.

Keeping Saigon safe required human intelligence, most often from captured prisoners. I had a running debate about how North Vietnamese prisoners should be treated with the South Vietnamese colonel who conducted interrogations. This colonel routinely tortured prisoners, producing a flood of information, much of it totally false. I argued for better treatment, and pressed for key prisoners to be turned over to the C.I.A., where humane interrogation methods were the rule, and more accurate intelligence the result.

The colonel finally relented and turned over a battered prisoner to me, saying, “This man knows a lot but he will not talk to me.” We treated the prisoner’s wounds, reunited him with his family and allowed him to make his first visit to Saigon. Surprised by the city’s affluence, he said he would tell us anything we asked. The result was a flood of actionable intelligence that allowed us to disrupt planned operations, including rocket attacks against Saigon.

“Speaking with the enemy” by Donald P. Gregg NYT

I had a friend who was an interregator in Vietnam. He was very clear about how it worked. You were out to wear down the prisoner, gain his trust, get him to let his guard down.  This same man spent most of the Bush years ranting about that administrations stupidity. Go figure. 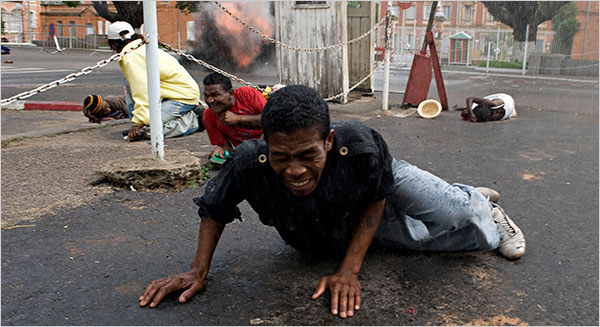 Governments continue the historically depraved practice of firing into crowds of unarmed people:   “More Than 20 Killed in Madagascar Protest” by Barry Bearak NYT

And finally a story near to my heart: “Digital Pirates Winning Battle with Studios” by Brian Stelter and Brad Stone NYT:

On the day last July when “The Dark Knight” arrived in theaters,Warner Brothers was ready with an ambitious antipiracy campaign that involved months of planning and steps to monitor each physical copy of the film.