I am pretty happy with the way my fall schedule is working out. Yesterday was a very full day spent mostly preparing for last night’s first choir rehearsal. I had my 8:30 AM ballet class, followed pretty quickly by my weekly meeting with my boss at church at 10:30 AM. The rest of the day I spent preparing for the evening rehearsal. 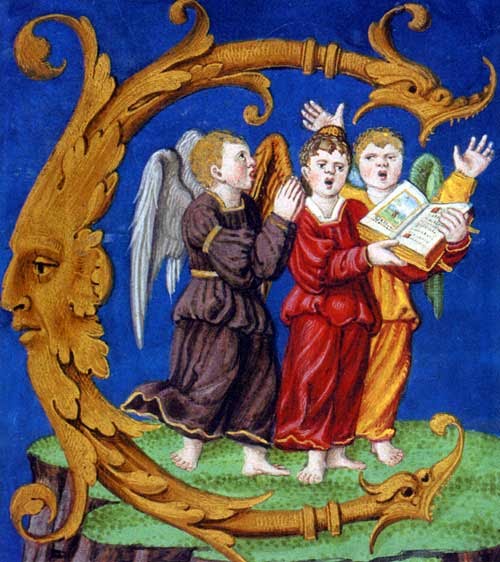 Reverend Jen and I decided to begin singing the Psalm to a more traditional Anglican chant. We have been using “simplified Anglican chant.”  This consists of chanting tones followed only by one note for each line. The congregation hasn’t been too bad with this.

Before my 8:30 class, I put together a sheet with a pointed psalm and six psalm tones on it for Rev Jen and I to consider at our meeting. (A pointed psalm is one in which the way the psalm should be sung is indicated.)

This shows the top of the sheet I made yesterday for Jen and me.

You’ll notice the underlined syllables. Technically the line should be above the syllables. Or at least that’s how the Hymnal 1982 does it.

I just went with the underlining due to time constraints. I also ordered a copy of Alec Wyton’s book The Anglican Chant Psalter in which he presumably “points” all the psalms in the Hymnal 1982.

At Jen’s suggestion I contacted another organist to ask if he knew any resources and/or how he did this sort of thing.

The guy’s name is Stephen White and he is an Episcopalian organist in Battle Creek.

I “friended” him a while back on Facebook when he came to my attention.

He was very cool about responding and sent me an email with a couple psalms attached to show me how he does it. He had the same dilemma I did: How to make a doc that looks like the hymnal. He ended up using back slashes and underlining.

This guy made my day by how quickly and graciously he responded to me out of the blue. This is so different from most of my experiences these days with other local musicians (Rhonda E excepted!). Anyway, I ended up making up a working psalm for the choir to begin practicing last night.

I was in a hurry, but I believe that I could make a doc more like the Hymnal 1982 notation using my Finale software. It would be a bit of pain and the secretary could not edit it (which is a drawback, because I have been known to, ahem, make mistakes).

We also began rehearsing my bastardization of “In Paradisum” from Duruflé’s Requiem I mentioned yesterday. I am hoping this will be an easy anthem for people. I was a bit floored that no one in the choir knew Duruflé’s Requiem. I think it is a very fine piece. Not only that but  no one seemed to know the chant, “In Paradisum.”

I guess I find that odd because I have used this chant so much at Roman Catholic funerals.

Speaking of Roman Catholics, I had another colleagial moment yesterday when Nick Palmer (the Roman Catholic Cathedral dude in Grand Rapids) sent me a motet he has composed on commission. I think he wants me to look it over. We used to meet more often and trade composing tips. But he seems to be pretty busy these days.

Hell I’m glad to get an emailed composition to look over and think about.

[Warning! This section is probably

only interesting to insane word lovers.]

Once again this morning I found myself perusing the online Oxford English Dictionary.  I was reading “The Dark Years,” a poem by W. H. Auden and ran across these lines: “that the spirit orgulous may while it can/ conform to its temporal focus with praise.”

I finished the reading poem but wondered what the word meant.

The OED says that it means “haughty.” It is a revived archaicism: “Used once by Shakespeare, and retained in the 1634 modernization of Malory’s Morte Arthur, but apparently obsolete from the mid 17th cent. until revived as a historical archaism by Southey and Scott in the early 19th cent.”

The Shakespeare citation from the OED: “a1616   Shakespeare Troilus & Cressida (1623) Prol. 2   From Iles of Greece The Princes Orgillous, their high blood chaf’d, Haue to the Port of Athens sent their shippes.”

Auden is cited also by the OED: “1941   W. H. Auden New Year Let. 187   That the orgulous spirit may while it can Conform to its temporal focus with praise.”

These are the lines I read in “The Dark Years.” I’m not sure why the OED citation says they are in “The New Letter.” It doesn’t seem to be the name of the original book of poetry.

Not only that, but when I use these search terms “orgulous inauthor:auden” in Google Books (without the quote marks), I find the words are flipped in Auden’s book of poems, The Double Man in what is presumably the same poem.

Weird. I wonder if it’s (horrors!) an error in the OEd.

I was happy to see my beloved James Joyce cited in this entry: “1922   J. Joyce Ulysses ii. xiv. [Oxen of the Sun] 372   Then spoke young Stephen orgulous of mother Church that would cast him out of her bosom.”

What more could I ask of the sentences cited to illustrate a word in the OED? Shakespeare, Joyce and Auden. Cool beans.

I checked and the etymology of “organ” (as in pipe organ) is not related to “orgelous.” Heh.

2 thoughts on “rambling and orgulous organist”