On the outskirts of LA, there is an obscure little museum about printing. David somehow ran across this and organized an expedition for us yesterday.

It was a fascinating collection of printing presses some of which are apparently historical.

This was our tour guide. I believe his name was Richard Small. He was funny and informative and continually quizzed my grand kids about things such as “Did they know where pasta originated…. the same place as printing?” Not Italy (their guess) but China!

This press was a replica of a replica of the Gutenberg press. After a bit Mr. Small walked us over to another building where he handed us over to two more docents who were equally entertaining and informative. One got the impression of stumbling into a meeting of older men in a guild (which is in fact what they are). 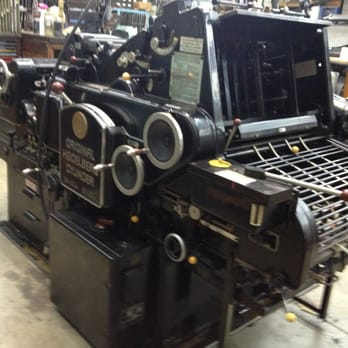 The last docent demonstrated this Heidelberg printing press. It was satisfying to watch and listen to him, since it was obvious how much he adored this machine. He talked about its precision. If you put one period on a page and ran the same sheet through several times you would only see that period since the machine was so precise. He also pointed out that in order to create a speeding up and slowing down that was necessary in the process two of the rollers were made of very dense material, one weighing more than a tone. Imagine, he said, that this roller had to be brought quickly to a stop and then started again. Then he took a nickel and put it on its edge on a part of the machine. While this huge machine ran, the nickle remained on its edge. Very cool.

Toward the end of the tour, everyone was invited to write down their name to be printed up by the linotype machine. I put mine all in lower case but to no avail.

We were given the actual metal type face made with our name on it to keep (note the foot of your reporter above).

On the way to the museum, my sun burn began to itch incredibly. My son, David, was kind enough to stop and allow me to buy some aloe gel. This helped.

I had been dumb enough to neglect to put on sunblock when I swam in the ocean a few days ago. After we got home, the itch began again with a vengeance. I googled it and found that this had a name: Hell’s Itch.

It was no joke. I was in the shower for a long time cooling it off. The aloe gel didn’t help. My googling revealed that the skin was healing itself and the only effective relief would come from showers and application of A & D ointment. My daughter-in-law, Cynthia, brought me some on purchased on her way home from work. That did help. Boy do i feel stupid.

It’s still uncomfortable but much much better.

At the Front in a Scarred Falluja – The New York Times

I think the use of “first person” in this article is weird. Maybe it’s supposed to be a feature but in my interface it was simply in the line up of news stories. The article starts with the word, “I.”