I was surprised to run across references to popular culture in the bio of Mao I am reading (Mao: The Real Story by Alexander Pantsov and Steven Levine). In 1937, not too long after The Long March, Mao and his forces settle in for the first time in a bit larger city, “Yan’an, the largest city in northern Shaanxi.”

She takes up residence with the rest of Mao’s forces in the loess caves. These caves were man made dwelling dug into the soft mountains. Here’s a pic of them more recently.

Mao and the other high ranking officials of his forces stayed in the city. Mao is quite taken with Smedley’s young beautiful translator, Wu Guangwei. He visits them often.

“Soon he and Smedley conceived the idea of organizing a dance school. They got hold of an old gramophone and several foxtrot records, and they arranged a musical evening at a church that had been abandoned by missionaries who had fled the city. Scandalized by such overt “debauchery,” the wives of the CCP leaders boycotted the dance lessons, but their husbands happily took part.}” 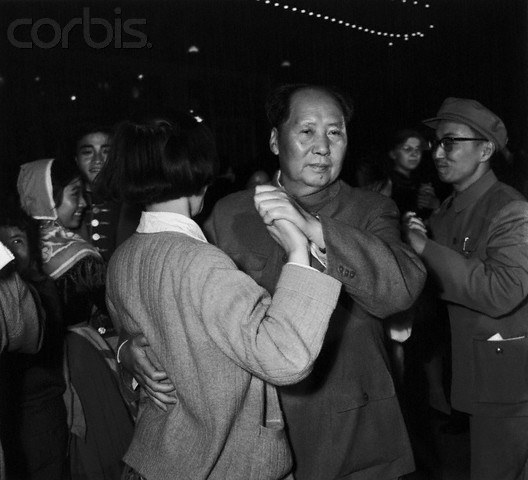 So Mao and the ruthless leaders of the Communist revolution (who have not yet come into power over China but are still battling Chiang Kai Shek and the Guomindang) are happily cavorting to western foxtrot records as they take a bit of respite in Yan’an.

It’s not long before Mao is spending a great deal of time with  Wu Guangwei who is not only  Smedley’s translator but also an actress.

Mao’s wife confronts them and goes a bit nuts, beating on Mao with a flashlight and attacking Wu Guangwei and Smedley as well. Smedley’s give Mao’s wife a black eye and Mao tells her “You’re acting like a rich woman in a bad American movie.”