I have been noticing that a mild change has been coming over me in the last week or so.  I am feeling more confident in my own judgments and ideas. Not that I don’t still question them. But I realize that I have been living in an environment since the late 80s in which I am very often underestimated and misunderstood.  I attribute this to a myriad of causes  and not just my anachronistic appearance. Like my appearance some but not all of these factors are self-inflicted. Others are the result of people not seeing me accurately or even noticing me (hence my fondness for “invisible” metaphors). I am trying to reduce the self-inflicted ones and see myself more clearly and act more like who I really am.

This is ironic because when I think of my young adulthood, I think I was overestimated and misunderstood by many people in my environment and that I also often more easily fell into the trap of overestimating and misunderstanding myself.

Now I feel a bit better self assessed. In addition I sense that my judgments and perspective have a bit more validity than maybe I have been giving them personally.

I know this probably sounds strange if you know me at all.  I am sometimes perceived as over confident if not overbearing and suspect that I intimidate people.

I think discovering Andre Schiffrin the publisher contributed to my ongoing realization about the wider cosmopolitan perspective and continual learning I have pursued in my life.

This has definitely been impacted by my use of the Internet.

Yesterday I was sitting in the coffee shop with Eileen. She was relieved to get out and do some normal things I think after a week of convalescence and discomfort. So we lingered at the Internet table that the coffee shop provides for laptop users.

During this time, I perused the back catalog of Schiffrin’s publishing house,  The New Press.

Schiffrin has said that he set out to remedy the bad current situation, one in which conglomerates are buying up book publishers and insisting on more and more profit and less and less beneficial exposure of ideas. He said his idea of creating The New Press was to create a publishing equivalent of NPR or PBS.  I learned this from listening to his comments on C-Span. I am now about a third of the way through his book, The Business of Books: How International Conglomerates Took Over Publishing and Changed the Way We Read.

Anyway, I was able to look at his press’s catalog online. After I saw a book that looked interesting, I would then go to the local library’s online catalog and see if it was available.

This online use of catalogs is one that I have done since before the World Wide Web. I used to do it via Telnet which was an early Internet connection mode.

For me, the internet is not so much an immediate source of primary information but much more often a way to research how to obtain more primary information.  It can act like a cosmic catalog in which I can make some preliminary evaluation of materials to obtain to learn more.

Admittedly I have begun to use the Internet more and more as a source for primary information, especially news.

But yesterday while sitting in a coffee house I checked on the following books:

I have been aware of Studs Terkel for years and dipped into his books and heard him speak. I did not know how Schiffrin had approached him after he had been blacklisted and encouraged him to begin to make the books he made which are oral histories. Schiffrin tells the story in The Business of Books.

I thought Will the Circle be Unbroken: Reflections on Death, Rebirth and Hunger for a Faith sounded interesting. Also Hope Dies Last: Keeping the Faith in Difficult times.

Last night I read the introduction, personal notes  and the first interview in Hope Dies Last.  Schiffrin’s and Terkel’s populism attracts me. They are literate but still interested in popular culture and history. Here are couple quotes from Hope Dies Last:

Quoting Thomas Paine, Terkel says that what Paine said in 1791 is on the button in the 21st century and particularly and ironically in America where these ideas were once espoused.

“Freedom has been hunted round the globe; reason was considered as rebellion; and the slavery of fear has made men afraid to think. But such is the irresistible nature of truth that all it asks, and all it wants, is the liberty of appearing… In such a situation, man becomes what he ought. He sees his species not with the inhuman ideas of a natural enemy, but as a kindred.”

That is from the introduction of Hope Dies Last.  In his Personal Notes, Terkel quotes a radio broadcast made on V-E day, May 8, 1945. The broadcaster, Norman Corwin, “had written a one-hour program” to celebrate the end of the war.  Terkel quotes his works and they make me think of what happened in Cairo this week.

“Let the singing fade, the celebrants go home. The bowl is drained and empty, and the toasts are drunk. The guns are still, the tanks garaged, the planes rest in the hangar. Only the night remains. Outside the dew of morning glistens like a hope.”

This book has gone on my list of books to finish reading.  Several Terkel books were sitting on the shelves of my library.  There were other books and authors that caught my eye. Like Gunnar Myrdal. 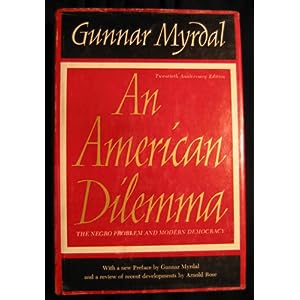 Myrdal seems to be a modern Swedish Tocqueville providing some fascinating looks at the problems of American life in the 20th Century.  In The Business of Books, Schiffrin writes

“… Myrdal was the most perceptive critic of the trap into which American society had fallen, a combination of racism and economic inequality…” 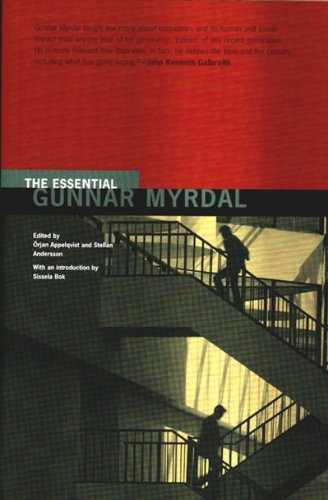 I was so interested in these last two books I ordered them with my credits at PaperBack Swap. They will be coming free in the mail soon.

I can see I’m going on a bit at length. My point is to expose some of these titles and at the same time demonstrate how the Internet can work like a card catalog to a cosmic bookstore/library/free book swap “dealy.”

Here are few more The New Press books that interested me and were at the local library. 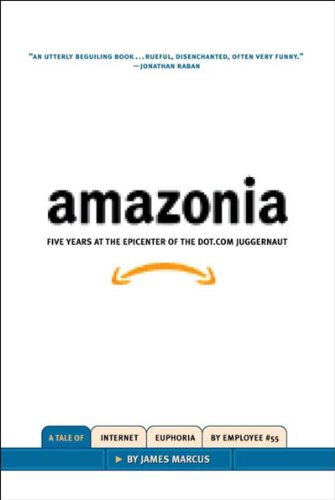 I read the first chapter in this book last night as well. Published in 2004, it describes Marcus’s ringside seat in the early days of Amazon.

This one was for Eileen. I interlibrary loaned it at her request while we were still sitting in the coffee shop.

Read the introduction to this book last night. It is a bit more polemic than the others but it connects to and updates the Robert McChesney’s historical analysis of media in our country which I read several years ago, Rich Media, Poor Democracy.

I tried not to look too much at other books at the library since I knew I was already going to take home a stack. Books on either side of the ones I was looking for beckoned. I didn’t recognize this title by Capote and have read a great deal of his work and admire it. Oh well, I added it to the stack and checked it out. It is published by Random House. I RANDOMLY ran across it while I was pulling the other books from the shelves at the library. Which just shows to go you that there’s nothing like browsing in the meat world. Heh.