Two poems from this morning’s reading.

First the ending of one of Ai’s long poems in her book Dread. The poem is called “Intercourse” and is dedicated to John Kennedy Jr.

She can’t believe it’s him, but he quickly disappears.

The poem ends with this wonderful image: (it is the voice of the dream lover speaking)

… I sink into a puddle of saltwater,

as you finally relent and call my name.

It’s too late. I came and went

in the same instant it took you to realize

you’d captured your prize only to lose him

as  he slipped between your things,

but could not penetrate the sealed landscape,

where celebrity creates an alternate reality.

There fact and fiction lie

one atop the other fucking furiously,

when one surrenders unconditionally,

from “Intercourse” by Ai

The other poem is by Raymond Carver.

Woke up this morning with
a terrific urge to lie in bed all day
and read. Fought against it for a minute.

Then looked out the window at the rain.
And gave over. Put myself entirely
in the keep of this rainy morning.

Would I live my life over again?
Make the same unforgivable mistakes?
Yes, given half a chance.

from Where Water Comes Together with Other Water by Raymond Carver 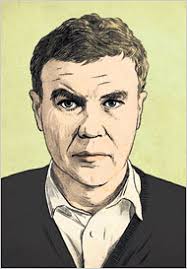 These two poems neatly parse my mood. The first addresses my reoccurring wrestling with the concept of celebrity. I like how Ai evokes the image that fact and fiction are both on top of each other and how each negates the other. I don’t entirely buy it of course but it is compact way to think about it.

Both poems are melancholy. Melancholia dogged my steps most of the day yesterday. The misfortunes of my extended family weigh on me.

In the afternoon I dropped by my Mom’s room at the nursing home with books for her to read. I systematically take her old books to the library, enter them in a list I keep of  the books she has read or had the chance to read, search for new ones and then check them out and take them to her.

The room was dark, shades drawn. The bed was unmade. Mom was sitting in her chair sleeping probably. I suspect she is wrestling with depression. I sat with her a bit. I gently chatted with her. She told me she had skipped lunch and stayed in her room. They brought her a bit of food which she presumably ate. When I asked her why she said she wasn’t hungry. When she got up to go to her bathroom, I opened the shades and rainy light poured into the room.

When she came back I interested her in my brother the priest’s latest newsletter which his church had mailed her. She asked for her glasses and looked through it.

Then I booted up her little laptop and showed her some family pics on Facebook.

By the time I was leaving she was feeling hungry (she said). I asked her to go for a little walk which she did. She didn’t bother with her shoes and walked around with me in her stocking feet.

While we were walking the halls of her nursing home I asked her what she was thinking about these days. “Not much,” she replied.

I first read this articles online about Climate Talks going on. This morning I found some more articles:

This article seems to try to justify the weak coverage of the talks in the US media.

I had to read an Australian article to find out that “The United States has never ratified the agreement. Round two, which will take effect on January 1 and run until 2020, has been further weakened by the withdrawal of Russia, Canada and Japan.”

This is from the following link:

Harlem to Say Goodbye to the Lenox Lounge – NYTimes.com

A careful reading of this article shows that it’s possible the new owners will preserve much about the lounge.

This article reminded me of a conversation I had with my brilliant cousin who is an engineer and works for the government in DC. Even with his excellent technical mind he firmly believes in creationism. Has been to the museum described in this article.