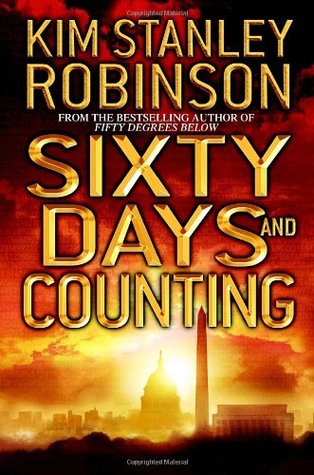 I finished this book this morning. I was very disappointed in it. It’s supposed to be antidystopian novel. Alternate future. That sort of stuff.  It’s basically a liberal wet dream which offered me very little encouragement in the age of Trump. The USA is leading the world in dealing with Global Warming. There is a little bit of intrigue but not enough to warrant an entire book. I found the characters two dimensional and uninteresting.

The only part I enjoyed were the copious quotes from Emerson and Thoreau.

And this quote which the fictional president put in his blog (blog. Not Twitter, you understand.) It’s regarding the USA:

“Through new uses of corporations, banks, securities, new machinery of industry,of labor and capital—all undreamed of by the Fathers—the whole architecture of modern life was impressed into the service of economic royalists. It was natural and perhaps human that the privileged princes of these new economic dynasties, thirsting for power, reached out for control of government itself. They created a new despotism and wrapped it in the robes of legal sanction. In its service new mercenaries sought to regiment the people, their labor and their property. And as a result the average man once more confronted the problem that faced the Minute Men. For too many of us life was no longer free; liberty no longer real; men could no longer follow the pursuit of happiness. Against economic tyranny such as this, the American citizen could appeal only to the organized power of the Government.”

Yesterday recital was very successful, but I’m still savoring some of the residual peripheral oddness. Rhonda played brilliantly, of course. The crowd was around 80 and made up many “organistas.” I figure most of this was the draw to hear Rhonda and to see the new organ.  I made the mistake of not introducing myself when I got up to introduce Rhonda. I guess it was more like a rock concert in my mind where the first dude at the mike doesn’t introduce himself only the headline act.

We  had AGOers from Grand Rapids and Lansing. I think they wondered who the fuzzy old guy was. None of them introduced themselves to me afterwards. How could they? They probably didn’t know who I was. I was introduced to a few of them. But most of them simply stared at the organ and then at me.

I am feeling more and more eccentric. I felt very distant from religion yesterday. I like doing my job and played some medium difficult music well at Eucharist. I am returning to immersing myself in music after a bit of a hiatus. I have kept up my practicing (except for yesterday, ahem). But I haven’t had time to sit and read music I love. But I have begun to return to this via the Well Tempered Clavier of Bach on my old out of tune piano.

I love this book. I can remember when the mother of a friend of mine (Mrs. Angus was her name) pointed the book out to me on her piano and told me I was going to have a lot of fun with it in my playing. Boy was she right. I also remember when I first began serious study of music at Ohio Weslyan thinking that I would be satisfied with a piano technique that would enable me to to play the Well Tempered Clavier. I think I kind of have that now, so that’s something.

I was listening to a podcast this morning from Boston which referred to Zappa as eccentric. I think that if he’s eccentric, then in my own small way so am I.

I think I’ll stop here and let Eileen use this computer since out big computer is not exactly working well.