I think about concert etiquette quit a bit. I wonder about it. Historically the idea of listening silently and with total concentration to a piece of music being performed is something that evolved in Western Civ in the 20th century. In the previous centuries we have records of audiences being sporadic in the attention they paid to music being performed. If it caught their attention, apparently they were more likely to stop talking for a bit but soon would resume less than full attention to what was being played.

One may think this inattention limited to the Baroque and early Classical period before the notion of making one’s money through concertizing really evolves. Certainly it’s not hard to find historical references to outrageous behavior of listeners in churches and theaters.

Writing primarily about the evolution of solo piano recitals, in his book After the Golden Age, Kenneth Hamilton describes many different venues and behaviors of listeners in the 19th Century.  In theaters (concert halls of the time), musical performances often occurred between acts of a play.  I have read in other places that symphonies were not necessarily performed with all movements in a row. Other music would be interpolated between movements.

The hushed reverence that one often experiences at classical music concerts is more of an aberration in the long view of music’s history.

Hamilton writes of the early 18th century salon performances in which “audiences simply tuned out the musicians as providers of background music to their gossiping. Charles Hallé  was once bemused to be congratulated on playing more quietly than Alexander Dreschock, who was ‘so loud that he made it difficult for the ladies to talk.'” (p. 38 in After the Golden Age where Hamilton is quoting from Hallé’s Autobiography, with Correspondence and Diaries, ed Michael Kennedy, 1896, reprint 1972, p. 100). In the same chapter, Hamilton attributes the creation of the mythology of a hushed concert in the presence of greatness to a 1937 movie, Moonlight Sonata.

It “codifies a certain idea of what a piano recital ‘should’ be like.” It stars the great pianist Paderewski as himself. In the opening scenes, “the concert hall was actually a stage set constructed in a studio in London and the members of the audience however much they genuinely enjoyed hearing Paderewski play were extras paid to look moved, awed, and ultra-attentive. The audience listens in admiring silence to the performance of Chopin’s Polonaise [which opened the film] erupting in enthusiasm at the end.”

I only mention this because I think a lot about how people connect with music in my life and experience. I was at a concert last night at Calvin College. My friend Rhonda was playing a movement of Lou Harrison’s Concerto for Organ (which was adapted for organ and percussion).  At the end of this performance which ended the first half of the concert, the piece ends with a thunderous sounding gong. It lingered and in the resonance their rather fine hall there sounded almost like feedback. During this sound the conductor (and organizer of the percussion concert) began turning the audience and obviously signally that the piece was over. I thought it a bit odd that he had quit listening to the sound of the music. 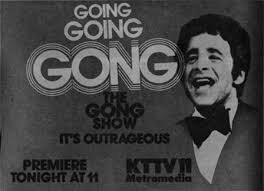 On the first piece of the concert, several young student percussionists came onstage and took their place at their instruments arranged in a row. The conductor was in place but one young person was wandering the stage looking lost for at least a minute if not more. Finally she picked up a drum stick from a stand which she seemed to have just found and took her place. As she was moving around I wondered if her movement was sort of a conceptual beginning to the piece. But no, she was simply unprepared. I hold the teacher/conductor a bit responsible for this.

But it was their first percussion department recital and wasn’t bad. I know Rhonda played well and there was a lot of good playing of interesting compositions.

It does leave me wondering about the strong contrast between how classical music audiences treat music and the vast majority of listeners in our society who probably “consume” most of their music as I am doing so right now, listening to recordings. Dancing to music, singing along, or making it oneself situates music more firmly in the lives of people in our culture than listening privately, in my view.

Last week, a ballet student asked me who I thought the best pianist who ever lived was. I was aghast. I didn’t know how to respond. I feebly said something about that I didn’t think like that and didn’t really have an answer. He looked disappointed.