I am gingerly keyboarding with two bandaged fingers. Around this time of year my fingers sometimes get very dry and cracked near the fingernail. Yesterday I spent most of the afternoon and evening in rehearsals (easily over six hours all told) and my fingers are sore and in bad shape. But my spirits are high. 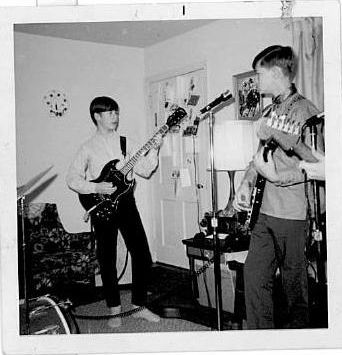 The rehearsal with Jonathan and Kevin went splendidly.  Kevin is a fluent percusionist and a bit younger than Jonathan. Jonathan and I attempted to integrate him as a full creative partner in our work. This entailed some unusual discussion and rehearsal. Kevin is interested in playing bass and drums at the same time so we did a lot of that yesterday. I can see that he will open up creatively in performance as well as rehearsal. At least that’s my expectation.

We actually managed to rehearse our entire set list of pieces we play together. Today Jonathan and I are meeting, probably to discuss yesterday, revamp the set list and maybe put together a little poster with the names of the four performers on it.

I am thinking of adding my composition, “One Page Essay: from Brahms to Satie.” This a piano piece I wrote recently that begins in the style of Brahms and gradually changes to the style of Satie. At least that was my intention. Surprisingly when I showed it to Jonathan he seemed to like it. I was thinking it might be an  unusual way to begin the set at the coffee house.

The first act of the evening at the coffeeh house is a fiddler. An undisguised piano solo on an accoustic piano might set a bit of a different tone for the evening.

It would lead seamlessly into the introduction to the first song, “Frickin Trains.” I plan  to run it past Jonathan today. I still am planning to perform movement two of the highly abstract, “”Vingt Regards sur l’enfant Jesus” by Olivier Messiaen.

Yesterday when I was practicing movement one of this work, I was looking hard at one of the several 11 note chords (ahem… get it? 11 notes… ten fingers?). This particular one I find difficult to play. But I noticed it is written in two different ways in the piece. It looks like a typo. In one of the ways, the lowest note is played slightly before the rest of the chord. This is easier to negotiate than trying to simultaneously play all eleven notes precisely at the same time (as the other notation indicates).

It’s actually a bit of a mundane question. I emailed one of the pianists I know at the local college and asked him if he knew the work and if he had an opinion.

In the meantime I was doing some research (while sitting in my mom’s shrink’s office yesterday. I do love the tubes of the internets), and discovered that further on in this piece Messiaen “paraphrases” this movement. Movement one is supposed to be the ”Gaze of the Father.” “Avec Amour” as Messiaen puts it. If you don’t know this work, it is a gentle hovering piece in F#major that can be surprise in its beauty and tenderness. Later in movment 5 which is called “REGARD DU FILS SUR LE FILS (The Contemplation of the Son upon the Son)” He elaborates on the music of the earlier movement. It is a blow by blow expansion. When it reaches the point of the chord in question, he does it the easy way. Heh. I think it’s a misprint.

On the parent front, the lawyer seems to be in a bit of tizzy. I had a funny email from him yesterday which he sent before completing. Hmmm. Anyway, I have to run down some more paperwork for him to submit to Medicaid. Apparently they have given us an extension to the 9th day of this month to append our very complicated (and previously erroneously filled out) application for Dad’s medicaid assistance. Of course my lawyer only informed me of this deadline yesterday (that would be the third day of March).

O that reminds me.

I did a gotcha on my church staff a couple of weeks ago when we were scheduling today’s staff meeting. The staff is pretty intimidated by me, I think. I am a bit of presence phsycially with my erupting passion and intense affect.

Also some of them probably are intimidated by my Notre Dame degree (hah! Little do they know how sucky Notre Dame was in some of its stuff…. but actually not the liturgy part). So when I solemnly said to them… “O right. We’ll be meeting on the day of the great command. You all know that date? Right?”

Embarrased pause as they look at me. I wait a beat and say in my best Mr Peabody voice:
“You know…..

0 thoughts on “mostly boring jupe junk post…. but ends with a joke”