I scheduled four separate rehearsals for myself at the organ over the last two days, one before lunch and one after. I spent some calculated time trying to learn as thoroughly as possible the Buxtehude Praeludium I am planning to perform this morning. There are about four or five treacherous little sections where the pedal is very independent of the manuals. I took each of these sections and broke them into component parts (at least pedal alone, left hand and pedal)repeating each step about ten times. Then slowly put it all together for another ten times. This kind of repetition in practice is something that’s crept back into my rehearsal technique the last few years. I often practice hands separately at the organ and piano and pedal separately at the organ, then combining them at a slower tempo.

I suppose I’m once again testing my rehearsal technique this morning. The Buxtehude is more thoroughly prepared than many things I have performed in public over the years (excluding my student years in which I would spend entire semesters on one set of pieces and perform them pretty well).  At the same time it is a little piece of the organ repertoire and is demanding. I chose it because I think it’s a happy little thing.

My organ doesn’t have many pipes so I often have to come with a sort of chamber rendition of large organ works. The kind of organ I associate with Buxtehude organs were (are) musical and architectural monuments. The music he created was like this as well. Noble cascades of sound to fill a breath taking room from an elegantly created and massive instrument. 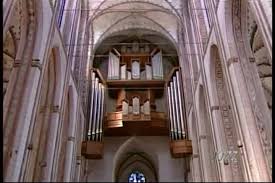 My interpretation of this on a smaller instrument of not that great quality in a room with little reverberation is to be a bid more playful and modest. This particular piece works well I think especially the fugal section which makes up most of it (four pages out of six). I love the way he repeats the written out trill three times at the beginning of the subject each time:

I play these slightly separated and in a manner I think of as playful.

Buxtehude goes on to complete the subject:

You can see the answer (the second entrance the fugal melody) in red above.

Anyway, I think this evolves into a very happy and joyful piece. It seems like an appropriate choice for Kick-Off Sunday replete with Baptisms at my church. I’m expecting to play it amidst bustling energy of people preparing for service. It should fit nicely.

Lots of irony in this piece. Example:

Staff members presented the establishment as easy to use and tried to dispel some of the mystery that shrouds the institution — though reporters were asked not to disclose its location.

Later it says the reporters were “not blindfolded.”

Kunming is the city Eileen and I visited Elizabeth and Jeremy several years ago. It is in the Yunnan Province where some of the earthquakes hit. Apparently it was in the far northeastern section of the province far from this city.

I continue to sadly watch what seems like the increase of this sort of thing.

We have a culture now where we have real trouble accepting that our kids make mistakes and fail, and when they do, we tend to blame someone else,”

Not sure if it’s actually increasing or just being reported more. Integrity and discipline have always been rare qualities I suspect.

Ms. Gallant recalled giving integrity counseling to a student who would send research papers to her mother to review before turning them in — and saw nothing wrong in that. One paper, it turned out, her mother had extensively rewritten — and extensively plagiarized.