Two days after my Dad’s memorial service I am thinking about the experiential aspect of communal grieving. Whenever I have pictured myself in possible future grieving at the death of a loved one, I usually think of my private feelings and wonder how I will deal with them. Having lived through the past few days I realize the strong waves of feelings and sadness are couched in an experience of others as much as self. 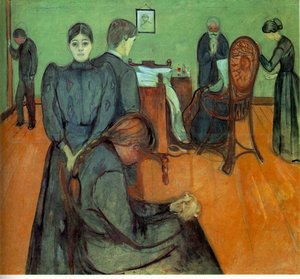 One moment of strong emotion was listening to my Dad’s college roommate give an appreciation of Dad’s life. Other moments were watching my adult children and wife weep which always has a strong impact on me. So I have experienced the wisdom of having an extended family and support system during this significant milestone of change in my life.

And as I was predicting, the reception afterwards was a good group moment. The food was elegant by my provincial standards. I noticed that the sound in the room of people talking was at a good volume even before people began sipping wine. When I commented to a Lutheran pastor friend that the gathering fit my definition of sacramental he enthusiastically agreed and said it was an agape meal. A bit more religious than my take on it, but still understandable and satisfying to contemplate.

I was perusing Emerson’s essays yesterday.

I was thinking of him as a essential American writer. My daughter and her partner are visiting for the funeral. He is UK bred and born and she is becoming more and more a UK person. Seeing our society through their eyes is fascinating. I once again become aware of the subtle little differences between people and peoples. Also of course this illuminatesw that which we all have in common. Emerson not only shaped many concepts that permeate the intellectual environment and history of the US but he also wrote about traveling abroad and specifically to England.

Like reading Mark Twain’s take on Europe, it’s engaging to overhear his experiences. “First Visit to England” is by Emerson’s own admission more about the people he meets and has conversations with than places he visits. When he meets and talks to Wordsworth (whom he describes as “a plain, elderly, white-haired man, not prepossessing, and disfigured by green goggles.”), they talk about America. Wordsworth apparently had many comments on the country (“his favorite topic”) including the interesting prediction that what America needed was a civil war to “teach the necessity of knitting the social ties stronger.” Unfortunately the war that came a few decades later was much different this and further divided us from each other.

Emerson qutoes him at length:

“I fear they [Americans] are too much given to the making of money; and secondly, to politics; that they make political distinction the end and not the means.”

These words ring particularly salient this very day as America leads the global economy into turmoil and I heard talk on the radio this morning utilizing the current evolving flu pandemic to further an essentially political struggle for the confirmation of secretary of health and human services, Kathleen Sebelius,Swine Flu Outbreak Highlights HHS Vacancies  and pass what looks like a hysterical extra-budget appropriation of funds instead of allowing the process to work. Although when I googled this last idea I found there was much more political discussion going on around Susan Collins who (oops) seems to have excised funding for this very situation from the stimulus bill package last February (Swine Flu Outbreak Revives Controversy Over Stimulus Funds).

And of the notion of what we all have in common, I sat in my kitchen yesterday and had a nice chat with my cousin who is a physicist who actively supports the Creation museum. It was interesting to hear his description of moving from a passionate evoluntionist to a creationist. I found his shifting of ideas to be something I could relate to but definitely not the content of his shift.