Before I do my “nothing post,” let me brag about my daughter Elizabeth. She has recently put up her sketches online. I would love to show you but she has blocked stealing them. Ahem. So here’s a link to her wonderful work [link]. Good stuff. Makes an old man proud. 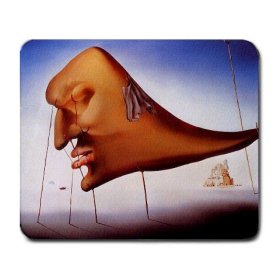 Woke up in an odd mood with one of those moments where the dream I was having was more real than waking up. I wonder if this relates to the section of Mr. Peanut I was reading last night. It describes (fictionally) the way Dr. Sam Sheppard (of the Fugitive TV show/movie fame) was dreaming about his wife as she was being murdered and then woke up actually hearing her calling his name.

I think I need to take some of today off. 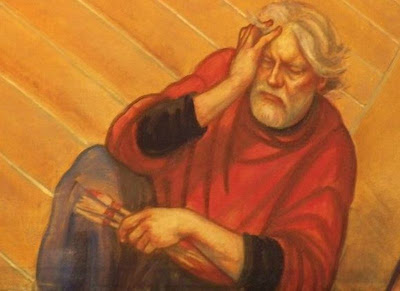 Yesterday I called my Mom and left a message on her machine to be remind her to be ready to be picked up for her shrink appointment at 10:30.  Then Eileen and I walked downtown and back. I jumped in the care and drove to where Mom lives. 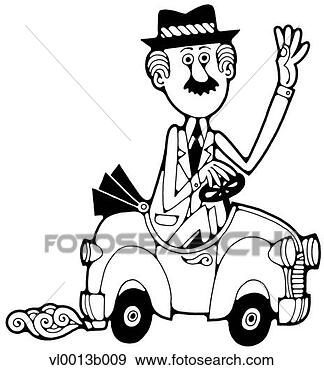 After checking her room and asking around, I eventually found her in the “Gathering Room” with 20 or so others listening to a Bible lesson. She was pretty embarrassed she had not made a note of her appointment and gamely jumped in the car without her usual hour of gussying up.

She felt pretty bad and I pointed out that it was not really a problem. I phoned the doctor’s office and we just arrived late.

Since she wasn’t dressed up as fancy as she likes she agreed to at least coming to my house for some soup and sandwich instead of going out to eat (which she does love to do).

After lunch we went back to her place and then I played a little April Birthday Party. It seemed to be pretty much the same group from the Bible lesson earlier in the day. It was held in the same room. 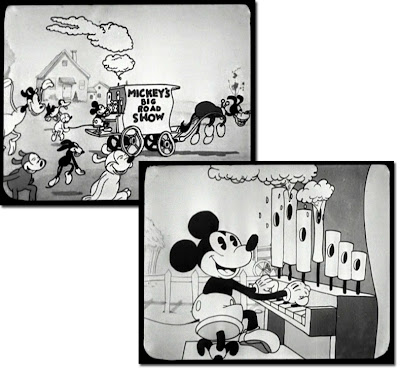 I didn’t play everything on the playlist I posted yesterday.  I dropped one of the Bach (the slow one… the Sarabande). I interspersed the pop tunes and the Haydn with group singing of hymns. I skipped the Brahms, Satie and my own setting. Seemed like the wise thing to do.

I do find it inspiring to listening to people singing. Thank goodness as that’s how I also earn my dollars at this point at church…. getting people to sing. I have been thinking about my job quite a bit. I’m wondering if the idea of being music director for Grace came mostly from me. I just glanced at my Grace job description file. I don’t seem to have a copy handy of my job description, but it does refer to me as Director of Music on the evaluation form my boss did.

All this is to say that before me they had two separate positions: choir director and organist. These were combined to pay me a wage. In the mean time I have been trying to get my boss to reconsider my job under slightly more professional terms. Under American Guild of Organists guidelines I am sorely underpaid even as a part time musician (this is due to my degrees and years of experience).

It might help me to think of myself more as the organist/choir director instead of the Director of Music. I know it’s all nonsense, but my little sense of professionalism is sometimes set askew by what happens musically out of my control at my gig. Ah well. But still it is a gig and I do like a lot about it.

0 thoughts on “first bragging then one of those nothing posts”