I read two short stories, an article (or two) and saw a movie yesterday. The movie, “Avatar,” seemed the weakest piece. I like the Kentridge video at the top of this post much more.  These are examples of his drawings.

“Avatar” was full of CGI and synthesized music.

It was also 3D which I enjoy. But. I found it oddly unsatisfying. Came home and read an article about the artist, William Kentridge. 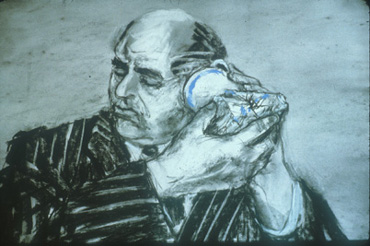 His images (as well as the writing of J.G. Ballard whose short story, “The Voices of Time was one that I  read last night) made clearer to me that if I should have to choose between them, I prefer the rough images and sounds of life to the slick sounds and pictures of  many highly produced movies and music.

Yesterday we did a gospel arrangement of “This Little Light of Mine” at church. I played the piano accompaniment  in an intentionally rough manner approximating the sound of a Chicago gospel pianist. It was a stark contrast to the musical language of Durufle’s setting of the Introit for Epiphany which I played as a prelude.

Both pieces were satisfying to me.

The gospel piece was able to draw the listening attention of the congregation in a much more direct way.  The Durufle resonated with the musical language of his Requiem: melodic, subtle, chant like, mournful.

Durufle wrote the Requiem and based it on the simple Mass chants in honor of his dead father who loved them.

The other short story I read yesterday was Updike’s “My Father’s Tears” which is not near as maudlin as it sounds in the title. [link to the story] Updike continues to draw me in. This buy diazepam dubai story is about the estrangement between a son and his real and symbolic father figures. This estrangement is a believable subtle small distance not a huge gaping alienation or anything. The older men seem fragile, flawed but less culpable than the narrating son figure who ends up depleted and unable to feel life. Updike’s story has the subtle irony of the unaware narrator. Or less aware. Or something. 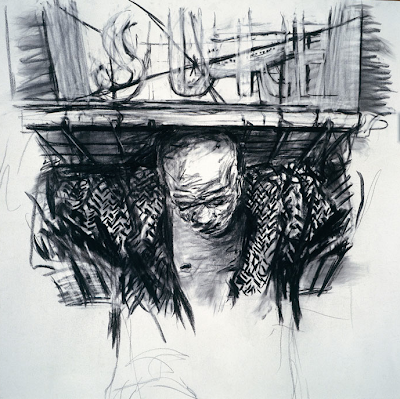 So this morning I got up thinking about how I am more attracted to what appears to be flawed than perfect. I thought of Erik Sanko’s song (which I can’t find online), “The Perfect Flaw.”

I know that I am looking at life with a different point of view. More like the old man who I am becoming, than the young man I have been. I am re-examining my life and my story and the story of my family of origin (as the family systems psychologists say).

It turns out that risk is interesting. More than that. Vital. Also letting go.

“In South Africa, there is never an assumption that a calm and gentle death is one’s birthright. September 11th in America had an interesting effect here. It helped lots of us understand that living in a dangerous, unstable world was not only a South African phenomenon, and that made people less anxious to leave.”

William Kentridge quoted in “Lines of Resistance” by Calvin Tomkins available online only to subscribers (I’m not even bothering to link it in. Fuck em. But it is a good read and he is a fascinating artist)