Eileen received her Kindle Fire in the mail yesterday. I took it to her at the library when I met her there for our evening meal. Unfortunately, it required a  4 hour charge before she could use it. By the time she arrived home after work she had managed to charge it up and immediately began messing with it.

So far she gives it good reviews. Right now (at breakfast) she is poking around on it. “I like it,” she says.

I’m pretty sure the apps outstrip her Blackberry Playbook.

I skipped watching/listening to the President’s State of the Union last night. I usually prefer to read things like this these days. Instead I did frivolous escape reading and finished off Good Omens by Neil Gaiman and Terry Pratchett. 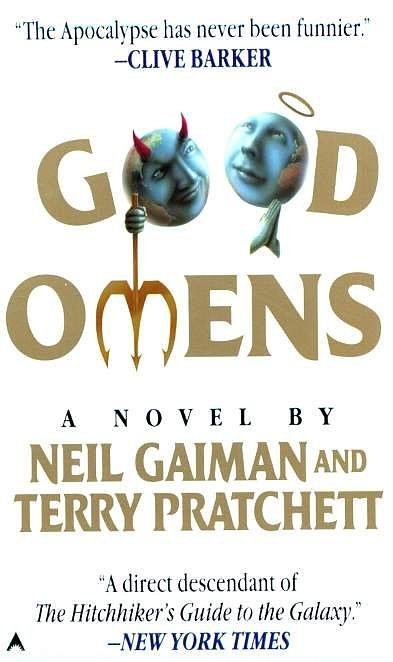 This is a little fluff piece which covers familiar material that has been done before. You’ve got your basic  angel and demon who carry most of the story. They are likable and they both like earth and hate to see it all come to an end. The Antichrist is born but babies are switched and he ends up being raised by a regular family to unexpected results.

Not sure if it’s as good as Hitchhiker’s Guide, but both are under the influence of other writers I sometimes admire (P.G. Wodehouse and C.S. Lewis).

It was just the ticket for last night’s reading.

I am feeling a bit guilty that I haven’t picked up Ugly to Start With by John Michael Cummings since reading the first few stories. You may recall that he emailed me and asked me to read and review his book. After reading the first story, I could tell he was a pretty good writer and bought a ebook copy. I guess in general I prefer book length stories. I do, however, read collections of them on occasion and need to put Cummings higher on my radar.

My brother and I were agreeing that those of us who read many books at once are put at a disadvantage by the absence of the actual books laying around to remind us we are reading them. Both Mark and I do the ebook thing and I think we both appreciate it. But I was amused that we both have this “out-of-sight/out-of mind” thing going on with ebooks.

Of course, I sometimes forget which books I am reading in the flesh (so to speak) as well. I deliberately tried to have a laid back day yesterday since I have been stressed lately. Not sure if I succeeded. Phone calls to Mom’s health care providers gently inquiring and urging them to do their jobs. Chose music for the choir and myself at the organ for this next Sunday. I have had to revise my plans to fit the situation. I  found a reasonably interesting arrangement of “Let All Mortal Flesh” for the choir to sing Sunday. It is unison and varies the melody rhythmically (stating it in eighth notes and then in quarter notes and then in clever mixes of this kind of variation). The cleverness is mostly in the slightly elaborate organ part which I now need to learn.

For the prelude, I fell back on a repeat of Leo Sowerby’s lovely (and lengthy) “Meditation” on PICARDY (That’s the name of the melody to the hymn).

I found a setting by Proulx of the closing hymn (Thou, whose almighty word – Tune name: MOSCOW – same tune as “Come Thou, Almighty King”).

I’m about half way through this interactive version of President Obama’s State of the Union Speech from yesterday night.

An Assault on Democracy – NYTimes.com

Editorial that taught me something about the “relentless campaign against free speech” of President Rafael Correa of Ecuador.

It never fails to amaze me how many smart people (like Supreme Court Justices) think there’s no problem with pumping up our election process with more and more money. “… [A]s of Jan. 1, the International Code of Botanical Nomenclature no longer compels botanists to provide a Latin description of a new species. Perhaps even more significant, the code now recognizes publication in online academic journals as equally valid as print publication. Both changes will help to speed up the race to catalog the world’s plant life.” quote from article

2 thoughts on “Eileen gets a new toy, Jupe keeps on reading”