It’s a gas to pick up a book and begin reading with no context, just to take it pretty much on its own terms. My daughter, Elizabeth, recently mailed me this little book by Patti Smith. I recognized the name, had a vague idea of Smith as a punk rocker/artist…. after googling her I recalled she was involved with the Mapplethorpe set in New York. 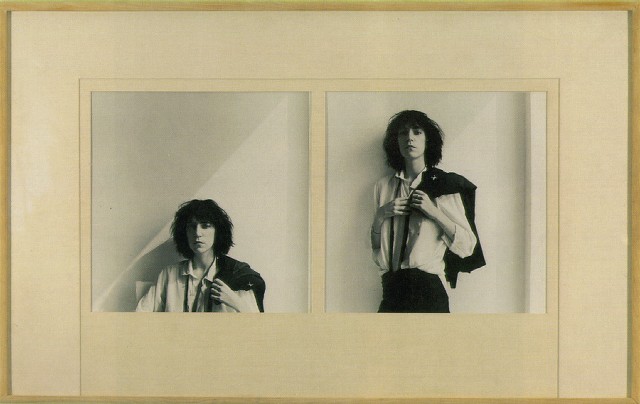 So I didn’t have much orientation but happily started reading. The books is dreamy bits of prose with many many obscure references. I like this in the day of being able to run unknown words and references down online. Smith refers to music I don’t know. Right now I’m listening to this:

As I first listened to this, I somehow had Tosca playing in the background. Earlier in the morning I began a play list of Smith music references. I inadvertently must have began playing the long aria, “Vissi d’arte” which Smith refers to in Woolgathering. Later I began playing the Patty Waters YouTube (since she didn’t seem to be on spotify). I thought they were the same recording with Tosca being pretty much in the foreground. How unusual and 60s and John Cage like, I thought. I even wondered how this recording got past me since the juxtaposition was so striking: Puccini and folk music and jazz…. the use of a recording in a recording….

As I poked around, I couldn’t find anything about this unusual use of Puccini. I started to suspect that either the YouTube video wasn’t the Patty Waters recording or something else was going on. Sure enough, I was playing Spotify and YouTube at the same time.

I’m now listening to the Patty Waters and it still sounds pretty determinedly avant-guarde for the time.  I just went over to Amazon and bought the whole album in MP3s for the grand total of $8.99. What a bargain! Plus I love the immediacy of the interwebs. Discover it. Think about it. Preview it. Purchase it at a reasonable price. Listen to it. The jokes on me for the supposed juxtaposition I guess. I must be a soft headed goofball, because I am enjoying the Waters recording a lot now without Puccini simultaneously playing.

I was entranced with the Tosca aria because it begins with these words: “Vissi d’arte, vissi d’amore” – I lived for my art, I lived for love…

I look forward to running down other references in Smith. I have added the little book to my morning poetry reading.

Speaking of which, I did talk to the doctor about getting up early and reading poetry as part of the lowering of my blood pressure. “You’re going to laugh at me,” I told her. She took on that professional nothing will perturb me look that doctors have to know. She wasn’t embarrassed until I asked her if she knew the work of William Carlos Williams. She murmured about not knowing much about poetry. I told her I  only mention it because Williams was a doctor. I thought but did not tell this handsome 45 year old American Hispanic that Williams’ mother was Hispanic and that his middle name Carlos was the name of his uncle. Some things are beyond the medical consultation room I guess.

I try to do what my doctor tells me. But I think of it as having a modern witch doctor (not to disparage the profession). One superstitiously follows their advice, exercise, attempt to eat right. It’s all magic anyway. And luck. Maybe one will be spared a bit longer and get to taste life. Maybe not.

It reminds me of Dylan Thomas’s dedication to his poetry:

“I read somewhere of a shepherd who, when asked why he made, from within fairy rings, ritual observances to the moon to protect his flocks, replied: ‘I’d be a dam’ fool if I didn’t!’ These, poems, with all their crudities, doubts, and confusions, are written for the love of Man and in praise of God, and I’d be a damn’ fool if they weren’t.”

This paragraph which I read in my youth has had a huge influence in my ability to embrace the idea of believing at all…. believing in the doctor or the priest… I often find myself thinking of Dylan Thomas’s shepherd.

PolitiFact | Everything you want to know about the health care law*

Next week Supreme Court hearings on health care audio will be available!

Not sure what this is…. It seems to be a sort of witty rambling of a woman about my age (or a bit younger) about experiencing New York… kind of fun.

Krugman continues to point to lies and hysteria.

As Richard Hofstadter pointed out in his classic 1964 essay “The Paranoid Style in American Politics,” crazy conspiracy theories have been an American tradition ever since clergymen began warning that Thomas Jefferson was an agent of the Bavarian Illuminati. But it’s one thing to have a paranoid fringe playing a marginal role in a nation’s political life; it’s something quite different when that fringe takes over a whole party, to the point where candidates must share, or pretend to share, that fringe’s paranoia to receive the party’s presidential nod.

Inspiring things happening at this school.

Did you know the controversial statue of Eisenhower as a child will be dwarfed by statues or representations of him as an adult?

Examining how the President and his critics both undermine the possibility of moving forward with Health Care.