Today is Memorial Day in the USA. Recently I was reading somewhere (or it could have been a podcast I listened to)  that the USA in its current mad state has made a cult of the military. Thanking service people for their service and so on. On Memorial Day I have very mixed feelings. I have tons of sympathy for people who are serving in the military, especially those who turned to it for an education and/or a livelihood. However, I understand that the first task of the military is to kill humans in service of the country it hails from. It’s like business. The bottom line is to make money. The bottom line of the military is dead bodies (see General Patton’s Christmas cards with stacks of dead Vietnamese on them). The logic of the military is iron clad as far as I can see. Strip away the romanticism and what you have left is pretty horrible to me. And to top it off, the people who run our society, usually old and rich, don’t seem to blink twice about sending tons of young people to their death to subsidize their wars which often look to be based on either accumulation of the fast diminishing resources of our planet or profiteering. 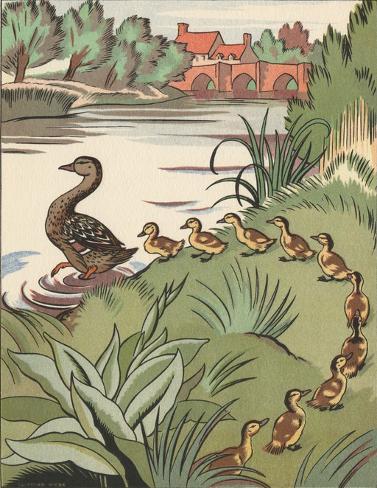 I’m in a happy mood, eh? Well today driving over to pick up a mangle that my wife had decided to buy used, I killed a momma duck who was crossing the highway with a trail of ducklings.

Bah. Nothing to be done. I didn’t get any warning and suddenly I was plowing through them and hit the mom. Fuck. Fuck a duck. Literally.

By the way, this is a mangle: 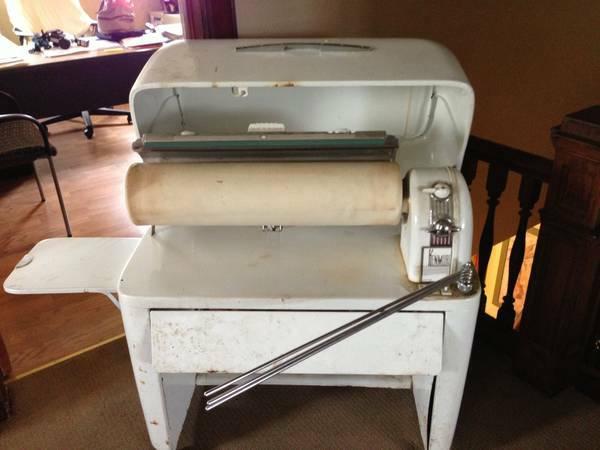 Yesterday one of my sopranos (Hi Barb!) was buttering me up with all kinds of compliments on how I lead the choir, but her punch line was “you need a vacation.” She is, of course, correct. I only have two Sundays left before a lengthy time off. Yesterday, the former Presiding Bishop of the Episcopal Church, The Right Reverend Katharine Jefferts Schori, was the celebrant for Eucharist at my church. The day before she did a little two hour thing where she talked and did Q and A. Eileen went to that. I am distinctly not in the mood for religious stuff and took the opportunity to skip it. I didn’t get a chance to meet Schori, but she gave an intelligent homily (no surprise there, she’s obviously pretty brilliant). 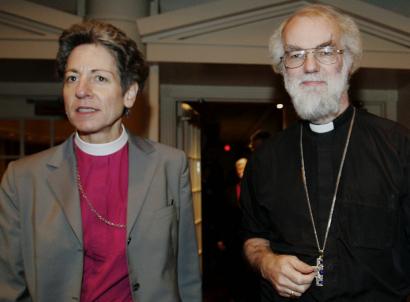 SCHORI ON THE LEFT , WILLIAMS ON THE RIGHT

But when I noticed Rowan Williams article in my New York Times app early this morning, I sighed and clicked on it to read it despite the fact that he is a former archbishop of Canterbury. Actually I know Williams to also be pretty brilliant, but as I just mentioned I’m not exactly in the mood for religious stuff.

I was in for a delightful surprise. His article was all about the book, Riddley Walker by Russell Hoban. Williams’ description inspired me to get hold of an ebook copy of this book. In it, Hoban does the Anthony Burgess Clockwork Orange trick of inventing a pidgin version of English which seems in both cases to be one of the main characters. In Hoban’s case, his story is set after some sort of terrible cataclysm in which the survivors are illiterate and have evolved an illiterate hodge podge language of English. Unsurprisingly I found a Burgess blurb which reads “this is what literature is meant to be.” I was sold.

Both Burgess and Hoban have a debt to my hero, James Joyce.

Later I was perusing my own books. I was sure I didn’t have Riddley Walker laying around somewhere. But Hoban is an unusual writer. He has written all kinds of stuff including children’s books. The Mouse and His Child was sitting on my shelf under H. It is a beautifully made book. I’m on chapter 3. Then I was doing my daily read in Clarence Lusane’s fascinating and informative Black History of the White House and ran across another interesting title: The Echo from Dealey Plaza: The True Story of the First African American on the White House Secret Service Detail and His Quest for Justice After the Assassination of JFK by Abraham Bolden. Bolden had been specifically invited by JFK. He has a story to tell and it’s not a happy one.  A used copy of his book is now wending its way into my greedy reader’s paws.

So I’m trying to take a day off today. I put off church planning until tomorrow. I need to not only outline the next two Sundays and the recital on the final Sunday, I want to start working on preparing Hymn choices for my subs.

But not today. Today I relax and read. Life is good.

2 thoughts on “day off and some new book titles”