It’s a discouraging time in the USA.  Yesterday in our weekly meeting, my boss and I both admitted that we felt like the church where we work and serve is the only church we could do so. In my boss’s case she was observing that one of our ladies guild was holding its monthly meeting in a sports bar. In my case, it’s more of a general disillusion with people who believe more than they think. 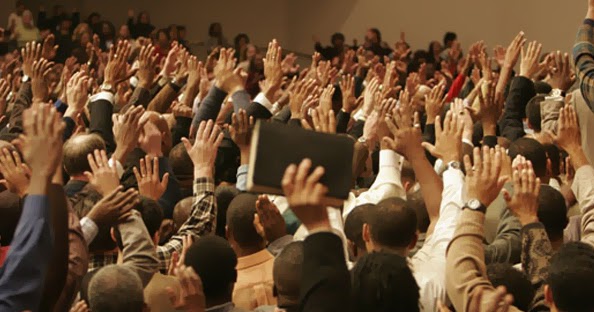 But having said that, last night’s choir rehearsal went well. It’s a small choir. I had five people out of fifteen missing, but miracle of miracle we had two new members.

Jen, my boss, and I were also mulling on the fact that if everyone in our church community who had been in the choir was in the choir now we would have a substantial number of people. Most if not all of the people who have left the choir have chosen not to discuss it with me. So I’m not absolutely sure why they quit. Although one former member did say that she experienced the choir as a “clusterfuck” and that it felt “toxic” to her. (I encouraged her to quit while informing her that many Sundays Jen and I experience church as a “clusterfuck.”).

So we made it through our first rehearsal. I can see I have  my work cut out for me again in trying to pull a decent sound from well meaning but exhausted volunteers. We did put on our new Anglican type robes and march around, practicing Sunday’s procession while singing. I guess morale was pretty high by the end of the evening.

Today I have a funeral. It purports to be a rather large one. The man who died was actually Roman Catholic but we’re burying him. For many years he and his wife attended different churches, the wife attending Grace. But I think the Roman Catholics have driven many of their members to “see a more pleasant” place to pray.

President Trump was in my dreams last night. He wasn’t evil, just obnoxious.

Back when I read the hard copy of the New York Times I looked forward to the Fall Education Supplement. Having read the NYT for so many years I know the rhythms of its various offerings like Tuesday Science Supplement and Wednesday Food Supplement. Now navigating its stories via its stupid app, the experience of its past rhythms is helpful. All this is to say that I think the Fall Education supplement is coming up. But accessing the paper through the app means that as stories get written they are put in the app and not delayed until a supplement or even the Sunday version of the paper.

The above story about Michigan Charter schools is a heartbreaking one and has contributed to my generally discouraged mood with the age of Trump.

It and the next link are long reads. They are obviously prepared for the Education Supplement.

The Resegregation of Jefferson County – The New York Times

This article is striking in many respects. I continue to read Edward E. Baptist’s The Half  Has Never Been Told: Slavery and the Making of American Capitalism. The USA is a country divided and torn by racial strife. I had no idea that the struggle to desegregate schools seems to have had an uninterrupted history since the fifties. Sheesh. No wonder white nationalism is such a problem.