Another crazy morning at my church yesterday. People continue to float in and out in odd ways. Two of my musicians skipped the pregame because they were leading other things in the church. I find that sort of defeating. I have complained to the boss but she doesn’t seem to see it quite the way I do (as staff competing with each other for resources rather than god forbid working together), so fuck it. Bill Bier the sax player did show up and he did wail on the postlude as expected. The little Handel choral rendition of Chandos 4 squeaked by with a respectable performance. It was under rehearsed and I spent all the prep time working on rhythms and notes and didn’t really have time to calibrate the choral sound the way I like to.

“Digo Si Senor” seem to raise the spirits of the congregation but they didn’t really sing it as well as I think they could have. I ran out into the center of the church and tried to cue them. In retrospect I think participation would have gone a bit better if I had done a complete play through of the tune. Live and learn. Got a phone call from the chair of the ballet department last night asking me to sub on piano for an 8:30 this morning which I immediately agreed to.  Combined with my afternoon class it looks about three hours of ballet today.  I need to get working on a playlist for a gig for violin and piano on Thursday evening. Also want to finish up those two choral pieces (Psalm 121 and Chanticleer’s rendition of “Woman at the Well”) this week for rehearsal on Sunday.  Busy busy.

In the meantime, here’s some book notes:

I listened McChesney interview Jennifer Pozner on her book on the damage Reality TV is doing. (link to page with audio) 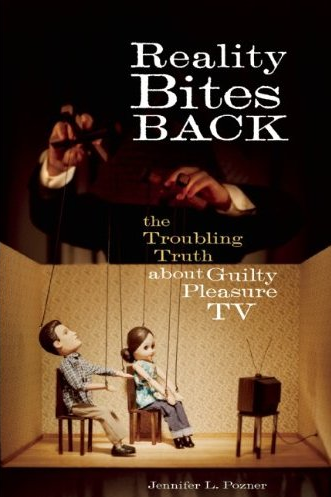 Reality Bites Back: The Troubling Truth About Guilty Pleasure TV outlines the history of “Reality TV” and its insidious retrogression of sexism (misogyny, unrealistic idealizing of women’s bodies and men as jackasses), racism (a return to the minstrel show mentality of people of color as stupid and uncouth), and self-serving sick seduction of viewers by shows designed around products.

A couple of things stood out to me in this program. First that McChesney was well aware that many listeners like myself don’t watch much of this kind of TV. It was almost amusing. Secondly, I learned a new word: Frankenbytes.

Did you know that Reality show voice overs of participants are often just words and phrases they have used in front of the camera cobbled together to say something they never said? I didn’t.

Also Pozner and McChesney have a brief devastating conversation regarding Trump’s show, “The Apprentice.” They point out how he himself is not exactly a successful business man having filed for bankruptcy more than once. And that the practices on the show are not only not how business works but would result in firings and legal action if people acted that way in businesses.

I’m more familiar with the Brit version which I found pretty repelling.

(Link to Pozner’s web site for her book) Literature from the Axis of Evil: Writing from Iran, Iraq, North Korea, and Other Enemy Nations is a title on the New Press’s catalog that caught my eye. My interlibrary-loaned copy came this weekend.  In the introduction it points out that “since the 1970s American access to world literature in translation has been steadily decreasing.” Refuting the concept that this is simply a response to market the editors write this lovely sentence:

“The [New York Times 2003 article, “America Yawns at Foreign Fiction] seemed to accept at face value publishers’ contention that only ‘the  market’ is to blame, without acknowledging that successful ‘markets’ are cultivated gardens not wild states of nature.”

This reminds me of a paragraph that caught my attention in Schriffin’s book, The Business of Books.

“The recent changes in publishing discussed in these pages demonstrate the application of market theory to the dissemination of culture. After the pattern of Ronald Reagan’s and Margaret Thacher’s probusiness policies, the owners of publishing house have increasingly ‘rationalized their activities.’ The market, it is argued is a sort of ideal democracy. It is not up to the elite to impose their values on readers, publishers claim, it is up to the public to choose what it wants—and if what it wants is increasingly downmarket and limited in scope, so be it….

Traditionally, ideas were exempted from the usual expectations of profit. It was often assumed that books propounding new approaches and different theories would lose money, certainly at the outset. The phrase, ‘the free market of ideas’ does not refer to the market value of each idea. On the contrary, what it means is that ideas of all sorts should have a chance to be put in public, to be expressed and argued fully and not in soundbites.” [emphasis added]

If this makes any sense to you, you might want to check the online magazine, “Words without borders,” [link] co-publisher of The Literature of the Axis of Evil.