Managed to basically take yesterday day off. I played through Beethoven piano sonatas and most of my favorite Prokofiev piano sonata (No. 2).

The beautiful G# minor slow movement (played above by Russian pianist/conductor, Mikhail Pletnev) felt like an elegy both for the Japanese tragedy of the earthquake/tsunami and the local tragedy of the death of a young professor.

I also finished off a couple of books I have been reading.

Schiffrin has been in the book business for a long time. In The Business of Books he argues that the conglomeration of publishers into new larger corporations has changed the book business. He has witnessed the new emphasis on only publishing books that make money without considering the responsibility of investing in new and important books and the ideas in them.

He quotes Klaus Wagenbach whom he describes as a “noted German publisher and Kafka scholar”:

“If books with small print runs disappear, the future will die. Kafka’s first book was published with a printing of 800 copies, Brecht’s first work merited 600. What would have happened if someone had decided that was not worth it?”

Schiffrin himself puts it this way:

“[I]f the domain of ideas is surrendered to those who want to make the most money, then the debate that is so essential for a functioning democracy will not take place. To a large degree it is this silence that has overtaken much of American intellectual life.”

“Books today have become adjuncts to the world of the mass media, offering light entertainment and reassurances that all is for the best in this, the best of all possible worlds. The resulting control on the spread of ideas is stricter than anyone would have thought possible in a free society. The need for public debate and open discussion, inherent in the democratic ideal, conflicts with the ever-stricter demand for total profit.”

The phrase, “best of all possible worlds,” is a sly nod to Voltaire’s Candide. He also quotes from another book I have read and was happy to see him refer to:

“Freedom of speech is the very foundation of democracy. To allow private interest to monopolize the most powerful means of reaching the human mind is to destroy democracy. Without freedom of speech, without the honest presentation of facts by people whose primary interest is not profits, there can be no intelligent basis for the determination of public policy.”

Incidentally, McChesney is not talking about the current crisis when he makes this comment. Rather, he is talking as a historian about 1903s debate about funding for radio. But Schiffrin (and I agree with him) thinks it applies to now. Schiffrin continues this riff later:

“The idea that our society has been fundamentally affected by the importance of money is widely recognized. Other values that have been looked to as countervailing forces are fast disappearing. Not only our belongings but our jobs and, indeed, our selves have become commodities to be bought and sold to the highest bidder. There have been other times in history when such changes have taken place. But now, linked to globalization and to the industrialization of the media, the effects are all the more staggering.”

If some of my readers (Ray, David) disagree with me and my weird ideas (see comments to the previous post), I hope this might help them see the logic in them (or that I’m not alone in them) even if they think I’m wrongheaded and off base.

I didn’t go looking for quotes to back up my responses from yesterday. These parts just leapt out me as I was reading last night. 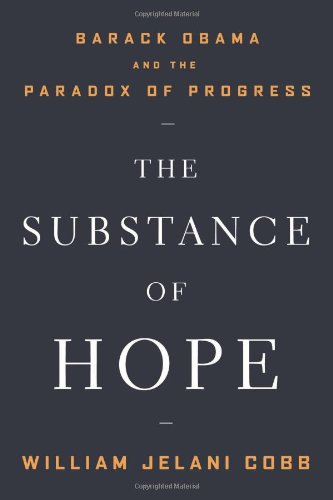 Cobb traces the phenomenon of Barack Obama’s presidential campaign and first year of his election. He is a historian who specializes in post-Civil War African-American history, 20th Century American politics and the history of the Cold War. I saw him speak on C-Span and was very impressed with his historical understanding of the present. So I interlibrary-loaned this book. I was not disappointed.

Last night I finished off the chapter where he picks apart the comparisons made between Obama and FDR and Obama and Lincoln (“Mandates and Metaphors: Of Lincoln, Roosevelt, and Obama).  He does this in a very nuanced way and I recommend reading him. He delicately observes that FDR’s wheelchair disability and Obama’s race worked in similar ways in their candidacy and subsequent presidency . Neither man could point clearly to what was the elephant in the room, but both campaigns and presidencies represented important changes in American life. And there are other comparisons like the wars and the economies these men had to deal with.

Regarding Obama’s race, I like this story he tells:

I also like his nuances about Lincoln and Obama.

After pointing out similarities in their rise to power, Cobb says “Some of this is best left not too deeply explored. Lincoln has come down through history as a champion of racial equality, a cause he never actually endorsed. As a young legislator, he paid little attention to issues concerning blacks in Illinois and made no objection  when blacks were disenfranchised in the state…. His earliest draft of the Emancipation Proclamation contained language stating that the freed blacks would be deported to the most reasonable and convenient locale.”

But he ends the chapter point to Obama’s awareness of and homage to Lincoln as evidenced in his use of the word, “lash,” in his inaugural address. Lincoln also used the image in his second inaugural.

“For us, they toiled in sweatshops and settled the West, endured the lash of the whip and plowed the hard earth.”

Praying that the “scourge of war may speedily pass“… Lincoln allowed that God might will that it continue “until every drop of blood drawn with the lash shall be paid by another drawn with the sword.”

Cobb is certain that Obama is too careful “a craftsman of words” for this to be coincidental and sees it as a “masterfully subtle nod, a recognition perhaps that Obama is not Lincoln—nor any other presidential predecessor–but that they are nonetheless bound to a common narrative, lashed, in effect, to the same themes of trial and perseverance, race and progress, turbulence and, inevitably, change.”

This book was an excellent read and I will watch for other titles by this brilliant contemporary observer.

from the UK Times Literary Supplement: “Yoga is a rich, multi-cultural, constantly changing interdisciplinary construction, far from the pure line that its adherents often claim for it”

This article mentions a composer I recently started listening to, Tyondai Braxton. I thought it would be interesting to check out the others.

Conservative Glenn Reynolds points justly to recent incidents of deplorable behavior towards conservatives.  Use of the word, thug, seems to commit the error he is deploring, however.

Regarding the recent international back no-fly zone in Libya.

The War on Elizabeth Warren by Paul Krugman- NYTimes.com

“Elizabeth Warren..[is] the law professor and bankruptcy expert who is in charge of setting up the new Consumer Financial Protection Bureau.”

“Nothing could be worse, from the point of view of bankers and the politicians who serve them, than to have consumers protected by someone who knows what she’s doing and has the personal credibility to stand up to pressure.”

“[F]ear of an imminent bond crisis reflects a profound misunderstanding of the differences between the short- and long-term challenges facing state and local governments, and what these governments can do to address them.”

Miller-McCune seems to be an Australia news source.

“A new … study finds the group of people who regularly attend arts events is both shrinking and getting less active.”

What Ever Happened to the Antiwar Movement? | Britannica Blog

David Boaz asks the question: “Could a new antiwar movement hook up with the Tea Party movement in a Stop the War, Stop the Spending revolt?”

Are book publishers making the same mistakes music distributors have made over and over?