Blogging a bit later in the day today since I had to get my Mom home from the ER this morning. She fell and cut her lip. Apparently that’s all. She was lucky to not have broken anything. Then I had to do a ballet class. After that, Rhonda E. and I drove down to Saugatuck for little AGO program committee meeting. My head is spinning a bit as I’m trying to get oriented after this kind of a morning.

I nailed my tricky little organ prelude yesterday (This means I played it well). It was  “Fantasy on “Mit Freuden zart” (Lord Christ, when first thou cam’st to earth” by Jan Bender, Op 47, no. 5a. Based on the closing hymn, it was a bit like Hugo Distler’s writing (Bender’s teacher’s). The choir sounded pretty good. I am instantly implementing choral techniques described and espoused by Brad Richmond in the workshop he gave our AGO chapter last week. Good stuff!

My brother emailed me this morning saying that he had noticed that he wasn’t getting my Facebook posts. He suggested that maybe I had limited a post’s dissemination and it had stayed default. This is exactly what happened. Sheesh.

1. I Was a Portrait by Francis Bacon – NYTimes.com

Someone who suffers from Bell’s palsey also loves Francis Bacon and sees themselves as a living portrait in his style. 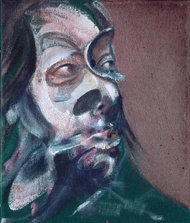 This is a partisan read from the left. I totally agree with it.

“All of this exposes the Republicans’ argument in favor of these food policies — a concern for our future, particularly the impact of the national debt on our children — as a dishonest and deeply cynical pretense.”

I continue to enjoy Susan Tomes blog. From this one:

“…pop music has now become The Establishment, with pop artists feted by presidents and prime ministers on both sides of the Atlantic. Classical music, he suggested, has already become almost a kind of ‘Outsider Art’. Paradoxically, this may even give it a new lease of life, because outsider art pursued with skill and dedication often attracts followers. We agreed that it might even be better for classical music to situate itself consciously at the margins rather than struggling to maintain some kind of position at the centre of the music world…”

4. How Liberals and Conservatives See the Pope – NYTimes.com

Hey! Harvey Cox is still alive. And he wrote a letter to the NYT.

I liked this sentence from this insightful article: “Racism is a virus that is growing clever at avoiding detection.” Aint that the truth!