After my morning reading on Hymnody to which I have added some pages from Bach’s Feet by Yearsley, I turned to the following article.

Written about eleven years ago, Parr deplores the low standing of the pipe organ in the world of music. He urges his audience (presumable organists) to take measures to connect to listeners better through some sensible recommendations like inviting people to watch the organist play and to invite them to sit on the bench and try it themselves. This past Sunday I made sure that my two 3rd graders knew that I played music with my feet. I told them that it allowed me to raise a hand to conduct. I invited them to come over during the prelude or postlude and watch (I don’t think either did but at least they were invited). I have been mulling the idea of doing a little introduction to the organ as part of the Wednesday night deal. Hard to do with such a small organ but I do have flutes, principals and one reed.

Parr also describes how organ music (which he insists many music lovers dislike) can sound like a wall of music. He points out that twenty minutes of a Prelude and Fugue by Bach can acquire a sameness to listeners that does not draw them in.

He invites organists to try to put themselves in the place of their listeners and schedule other music that might be attractive in addition to some of the more austere repertoire.

He recommended the composers: Edwin Lemare, as “treats” for the listeners. 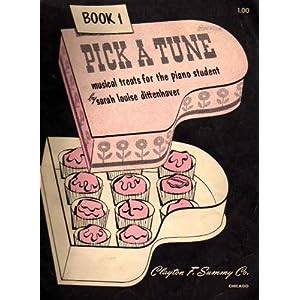 I recognize Whitlock but had to check out the first two on Spotify (to help me pick their popular tunes). Then I pulled up their scores on IMSLP (the International Music Score Library Project).

I admit that I found the music treacly in its 19th century sweetness. Yuck. I didn’t see or hear anything I would like to learn and perform. But at the same time I take his point.

Yesterday I chose a transcription of a Sarabande by Vaughan Williams for my prelude a week from Sunday. I think it’s hard to not hear as pretty beautiful, certainly not treacly. I try to choose music that attracts me as a listener. I’m a pretty opinionated dude, I know, but I still think that I will play music better if I am convinced of its worth and beauty. I kind of think this falls under Parr’s rubric of musical “treats.” I also have experienced many people who tell me they don’t like the pipe organ. They usually say it nicer than that by expressing a preference for the piano. Or they say that they can tell I like the piano better because I play it well or something like that.

Parr also encourages organists to play musically again thinking of the listener. This I also try to do. It’s one of the reasons Sunday mornings are so draining for me. I try to put myself deep into any music I do from the organ stuff to the congregational stuff.