The startling turn of events this week culminated yesterday in the Supreme Court ruling on the legality of same sex marriage yesterday. The family of the victims of Charleston race killings displayed astounding courage and character as they publicly forgave the murderer of their dear ones. I call this walking the walk instead of just talking the talk. And the Supreme Court ruling on the Affordable Care Act  happened. Combined with yesterday’s ruling this all left me with a dizzy sense of history happening before my eyes. 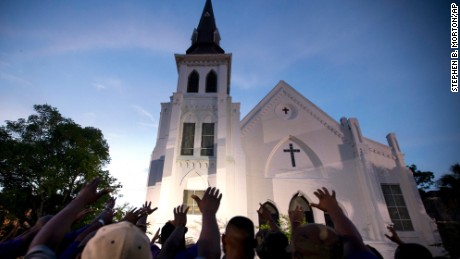 Not everyone noticed apparently. As I took my pizza from the pizza guy last night he asked how I was. I said, ecstatic. Why, he asked. The Supreme Court rulings. He said, How so? I tried to fill him in a bit but was a bit taken aback that he had no idea what I was talking about. Blissful ignorance, I guess.

For what it’s worth he was a person of color with several pierced ear rings. I know. I know. It’s superficial to think that would have anything to with anything. But it was a cautionary reminder to me that people I might think would have some awareness of issues like race and LGBT stuff might not.

I had a pleasant rehearsal with my friend, Jordan VanHemert who I know reads this blog from time to time (Hi Jordan!). We ran through a little Sax version of Vaughan Williams organ piece, Rhosymedre. It’s basically a straight transcription of the organ piece giving the sax the important lines. it sounds cool. Jordan is an amazing player. He has a gig tonight.

We then read through a couple movements of Franck’s A Major Violin Sonata again transcribed for Sax. Wow. Some difficult stuff for both players. I had trouble keeping up, but it was fun. And I liked the piece, especially the last movement. Jordan said he thought the piece was one of Franck’s best. He could be right.

My organ student was having physical problems yesterday and asked if instead of our weekly lesson we could sit and talk music and tech. I said yes but I wasn’t going to take her forty bucks for doing so. It’s probably silly of me not to charge her but I know myself well enough that I would probably bullshit for free about this topic.

She is a former teacher at Hope and has managed to retain her faculty online privileges. I urged her to check out the resources available to her this way. Specifically Naxos and the New Groves Dictionary of Music. Also the International Music Score Library Project is a great resource. She asked if she could walk through downloading a piece to my tablet’s music reader. So we did that.

Another good day in the life of Jupe.

Putin called Obama this week. I have been watching Putin and Xi Jinping. The world stage is fluid right now, to say the least. Russia and China are doing some weird shit (as is the USA). Like a lot of countries, both China and Russia use the USA as a whipping boy to seduce their populations into compliance with public policies. It looks like Putin lost the last round with NATO but only slightly and is still causing a lot of concern and confusion with their actions in Ukraine.

Kind of odd that China is moving the Beijing Government out of Beijing proper to make more room for the National government. We went to the Forbidden City when we visited Beijing. The Government headquarters are right there. Interesting to see China designing new cities.

So Burundi’s President is ignoring its constitution and running for a third time. That’s what these students were protesting. Odd image of people clamoring over and under walls  of the embassy to get away from the police.