I have been  messing around with my books. I’m trying to whittle down the number of books sitting by my chair in the living room to the ones I am reading. The problem is if I file books away in my collection, I forget that I want to read them. I decided to convert the guest bedroom into a sort of office area for myself.

When I moved my Greek texts in, I discovered that I own the first eight “books” of the Odyssey in Greek.

Published in 1897, it’s a beautiful old musty book I bought from the library in Holland.

I know this is a bit out of focus, but I wanted to show the Greek text. But more valuable than this, is the running commentary in the back of the book.

When I visited the James Joyce Bookshop in Dublin, I saw many beautiful books. My reaction was to not even consider purchasing one of them since I have so many books about Joyce that I hadn’t even opened. This morning I took a look at the Pound/Joyce letters I own.

In Dublin, I saw a beautiful, very expensive, edition of Joyce’s letters. I immediately thought of this book. It’s another library discard, this time from University of Detroit.

In the introduction I read that Pound was thinking of Joyce when he wrote his “Pisan Cantos.” I have attempted to read Pounds Cantos before. But I find some lovely poetry embedded in very obscure references many of which are in Chinese characters, as well as Greek, Italian, French, and others. But I pulled out my Pound and plowed away at Canto LXXIV, the first of the Cantos he wrote while sitting in a US Army Detention Center in Pisa, Italy awaiting his trial for treason due to his activities supporting Mussolini in WWII.

I read ten pages or so which is how I sometimes approach poetry or prose, simply plunging in and not looking up every word or reference. Then I stopped. I wanted to get a better idea of the references Pound was using so I began poking around online. I found out that the edition of Pound’s Cantos which I have owned for years is corrupt and doesn’t reflect Pounds written ideas very well. I did find a bit dated edition (2003) that has annotations and ordered it on Amazon. 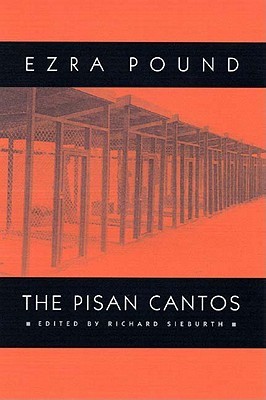 It was only about 20 bucks and has a lot of annotations even though it’s probably not as good an edition as will be eventually done.

In the 74th Canto, Pound uses the word, poluphloiboios. What the heck? This word I decided to look up. My phone told me  it was “Homer’s onomotopoetic invention for the sound made by the babbling sea.” Just now I checked the OED.

This is the only noun form of the word. There are several other adjectival expressions. Pound spells it poluphloiboios. I like the OED’s version better. It reminds me of the word, polytropus, used in the very beginning of the Odyssey to refer to Odysseus. Emily Wilson very cleverly translated this word as “complicated” as in “Odysseus was a complicated man.”

I have more things to say about books and words but I notice my word count is over 500 and I try to keep this to something like that unless I get carried away.