We had a nice train ride into London yesterday from Great Missenden. We headed for Tate Great Britain where Sarah used to work. We stopped briefly at a student art supplies shop so Matthew and Sarah could purchase materials for a project they are working on for Eileen’s library garden. Then into the gallery.

We were hoping to see a show that Sarah had prepared the captions and explanations for but it had been changed. We did see some examples of the work she did there. This was a large caption board.

The current show just finishing up was on Van Dyke. More interesting to me was the collection display connecting Turner to Rothko.

There were some fascinating watercolors by Turner that plainly showed the reason Rothko remarked (from the placards) that “this man Turner, he learned a lot from me.” Heh.

But you can see his point however jocularly and arrogantly made:

At the Tate Britian shop I picked up a new title I wasn’t aware of by John Berger. 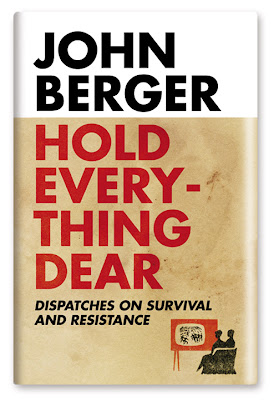 Eileen and I also purchased fancy Tate umbrellas as the day looked like imminent rain.

From Tate Britain we went to Charing Cross via a quick sandwich from the shops around Tralfagar Square which we ate on the steps there.

I was hoping to find some grundgy used book shops on Charing Cross. I should have known better. Even though the bookshops we went to were a bit dowdy, there were obviously not that obscure.

I did spend some time in the basement at Any Amount of Books (pictured above) looking at their cheap books (everything on these shelves is a pound). I found a New Testament Greek Grammar which I perversely purchased.

Since reading John Medina and listening to other commentators on brain science I have been thinking about the possibily of reattacking Greek. The brain science says that not only do older brains (like mine) have the capacity to learn language, it can actually be good for them causing new synaptic connections in the head. Cool beans. I haven’t lost the idea of reading homer in the original. But first there’s the dang alphabet to reacquaint myself with. Hence the cheap grammar.

I also picked up a book on Music in Mind and Culture for four pounds at Henry Pourds Books.

Beethoven’s Anvil: Music in Mind and Culture by William L. Benzon seems to be a 21st examination of how brain science works with music. Very cool.

On Cecil Court we found many more bookstores. One shop called Travis & Emory specialized in music books.  I was in pig heaven even though we needed to move on rather quickly. Ironically I purchased several bound music scores which seemed to be from a library collection from the “Free Library of Philadelphia.” So I will be taking bound scores of organ music by Anton Heiller, Anthony Newman and Ernst Pepping home to the states where they came from.

We had dinner at a lovely vegetarian restaurant. Then on to the theater, as they say.

I’m still processing “Waiting for Godot” which was the play we saw.

Interestingly, Patrick Stewart who played Di-di (Vladmir) was not as strong as Ian McKellan as Go-go (Estragon). I do think this might be due to the fact that he had the more difficult role. The whole play is online here.

As when I saw “Krapps Last Tape” on the west end of London, I found certain passages deeply moving and poignant. I think Stewart’s problem is the problem of the play which is that it is comic but also philisophic. His role especially. But he gave this speech very well:

VLADIMIR:
Was I sleeping, while the others suffered? Am I sleeping now? Tomorrow, when I wake, or think I do, what shall I say of today? That with Estragon my friend, at this place, until the fall of night, I waited for Godot? That Pozzo passed, with his carrier, and that he spoke to us? Probably. But in all that what truth will there be?
(Estragon, having struggled with his boots in vain, is dozing off again. Vladimir looks at him.) He’ll know nothing. He’ll tell me about the blows he received and I’ll give him a carrot. (Pause.) Astride of a grave and a difficult birth. Down in the hole, lingeringly, the grave digger puts on the forceps. We have time to grow old. The air is full of our cries. (He listens.) But habit is a great deadener. (He looks again at Estragon.) At me too someone is looking, of me too someone is saying, He is sleeping, he knows nothing, let him sleep on. (Pause.) I can’t go on! (Pause.) What have I said?
He goes feverishly to and fro, halts finally at extreme left, broods.

I was particularly struck by the lines: “Astride of a grave and a difficult birth. Down in the hole, lingeringly, the grave digger puts on the forceps. We have time to grow old. The air is full of our cries.” Di-di was playing on a speech earler given by Pozzo.
The rest of the cast was also phenomonal.
Pozzo reminded me of the blue meanie guy in the Yellow Submarine: A good time was had by all, I believe.