Time for another blog post. I’m lazing around on a quiet Sunday morning in Keene, New Hampshire instead of getting geared up to go do church. My brother, Mark, is off to do his priestly duties. My sister-in-law, Leigh, is off bird watching. I’m enjoying the morning.

I have been trying to do some relaxing. Mark and I went over to nearby Battlesboro on Friday to visit the bookshops and give Mark some time away from Keene. I bought my own copy of Sandman 5 and a book of poetry by Jane Shore, Music Minus One. I brought a library copy of volume 9 of the Sandman series with me and have been reading it. I have decided I would like to reread the whole series. I think it’s quite good. When I reread it, I always catch things I missed the first time. I like that. Might be fun to own them. 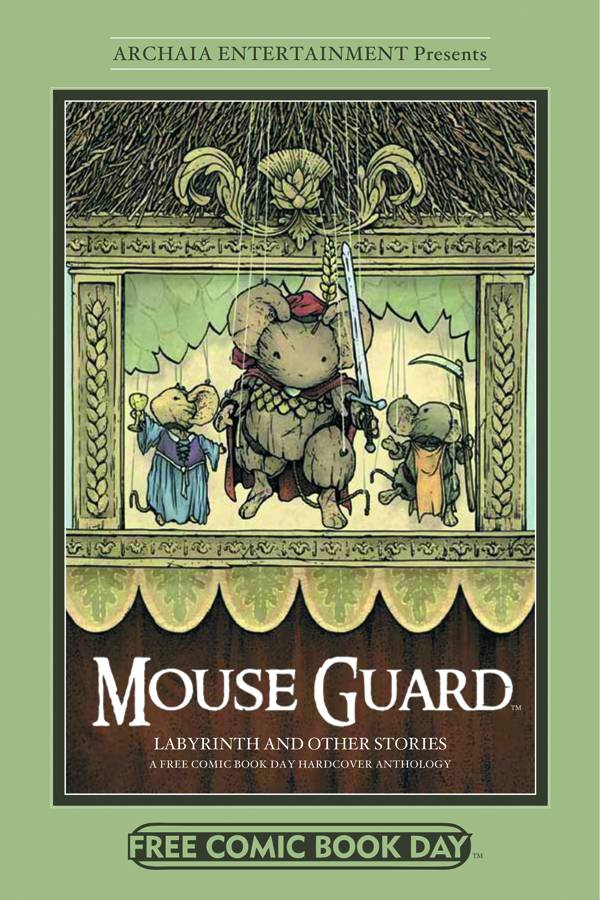 Yesterday was Free Comic Book Day at Comic Stores in the U.S. Mark and I walked over to the local Comic Book Store and were gratified to see several copies of Mouse Guard: Labyrinth and other stories awaiting us. It contains new work by Mark’s son-in-law, Jeremy Bastien.

One was allowed to choose three free comix from stacks of comix specially created for the day.

In addition to Mouse Guard, I chose Weathercraft and other unusual tales by Jim Woodring. Unfortunately, Bongo is probably not the work of the originator of the Simpsons (and other great stuff), Matt Groening. I think he may have done the cover since it’s signed, but the “script” is by Brian Houlihan and there is a team of artists listed in the credits that only includes Groening as Publisher. The comic is one of those that is two in one with each comic beginning upside down from and on the back of the other.  SpongeBob was on the other side of Bongo Comics.

I looked around at the used comics at the store and found one by Alan Moore, someone I admire.

Each Rype piece is an intricate and terrifying line drawing. Excellent stuff. Then we walked across the street to Eagle Books, a used book store.

I found a collection of Anne Sexton’s letters edited a few short years after her suicide by Linda Gray Sexton and Lois Ames.

I also have been developing an interest in how this area was before the white settlers moved in. Eagle Books had tons of books about and published here in Keene. They mostly were touristy or very very old and falling apart. I thumbed through them and that was fun.

The local library has put some local history books and pamphlets online, but none of it is about the people who lived here before the settlers as far as I can tell.

The most recent book, “Upper Ashuelot”; a history of Keene New Hampshire by the Keene History Committee (1968), contains this passage about Indians.

“When permanent settlement was finally made at Upper Ashuelot in 1736, the region had experienced some 10 years of peace. Roving bands of Indians were commonplace, threading their way in single file over trails they alone could recognize. The Schaghticoke tribe which once inhabited the area had long since moved to the Hudson River, the and the Squawkheags who followed them in the region had been nearly destroyed by the Mohawks in brutal indian warfare before 1670. The dreaded King Philip assembled his forces in the regioni during earlier Indian wars but few Indians had remained afterwards, although some of the former Indian residents knew the terittory and were able to lead hunting and war parties through the forest and swamps?
from
A Narrrative of Keen, new Hampshire 1732-1967
by David R. Proper in the 1968 online book linked above (emphasis added).

I could only quickly find this wiki  info one of the two tribes mentioned.

Anyway, I think this shit is interesting.

Print interview with my famous relative.

The War of Jenkins’s Ear and New York Hotels

Some other local history links I have been perusing. Apparently the town is named after British diplomat, Sir Benjamin Keene (King’s Lynn, 1697 – Madrid, 1757). He was British Ambassador to Spain and was unable to prevent “The War of Jenkins’s Ear.” I have never heard of this war, but the link above about it refers to it as “one of the wackiest wars in military history.” I have a hard time of conceiving of a war as “wacky,” but find the use of my family name intriguing if not gratifying.

This NYT’s feature article is pretty badly written (too “jaunty” for it’s subject), but I think the idea is cool.

This is the evidence in question:

When I clicked on the link for Brown University library where the document in question is available online, their site was down. Probably due to the link in the NYT article, no doubt.

This editorial about the continuing damage America is doing to itself by not granting civil liberties to all people.

Pertinent Morrow quote from this article:

In times like these, it may help to remember the words Edward R. Murrow used when he spoke out against McCarthy: “We can deny our heritage and our history, but we cannot escape responsibility for the result. There is no way for a citizen of a republic to abdicate his responsibilities. As a nation we have come into our full inheritance at a tender age. We proclaim ourselves, as indeed we are, the defenders of freedom, wherever it continues to exist in the world, but we cannot defend freedom abroad by deserting it at home.”

How Chemicals Change Us – NYTimes.com

<T>he scientists who know endocrine disruptors best overwhelmingly are already taking steps to protect their families. John Peterson Myers, chief scientist at Environmental Health Sciences and a co-author of the new analysis, said that his family had stopped buying canned food.
“We don’t microwave in plastic,” he added. “We don’t use pesticides in our house. I refuse receipts whenever I can. My default request at the A.T.M., known to my bank, is ‘no receipt.’ I never ask for a receipt from a gas station.”