The Pentecost Eucharist and afternoon recital was a huge success. We even ran out of bulletins. I didn’t notice until afterwards that this happened. Eileen thought we would. But when she said that, I checked and there were still quite a few.

I would say there were about 40 people in the audience. They were very attentive and appreciative. I think it was a wise thing to rely on program notes and not narrate. We came in under an hour. I don’t think there were any performances that weren’t stellar. Everything came off as planned from A to Z. What more could I ask for?

This morning I let myself do four lines of Homer. Then after breakfast, I relaxed to finishing typing up my notes on Go, Went, Gone. Then I went over to church and tidied up. After lunch, we went to the library, then Meijer. Just before leaving Eileen spotted Jacob Schaeffer visiting his folks nearby. She corralled him into helping me move her mangle. My back still hurts but the dam thing is in the house. 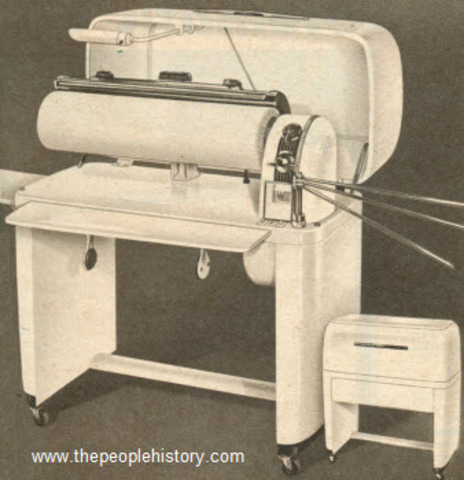 This is a mangle.

We just got back from Meijer and I’m resting up. I don’t think I will attempt more tasks today even though I could think of few since we are leaving on plane tomorrow fourish.