I got up yesterday morning after reading for two hours. As is not unusual, my body was sore from sitting. I didn’t think anything of it, until later in the day. I went to Harderwyk church and registered my pieces I will play there on Sunday. Came home and picked up Eileen and we went to the Brown Bag concert at the Holland Area Arts Council (more on that in a minute). I came home and quickly realized that my body ached all over. Oh no. I need to be on my game this weekend because I would like to acquit myself well in the music I will be performing (Tonight’s honor band concert, tomorrow’s church service, and tomorrow afternoon’s organ recital).

I spent the rest of yesterday laying down and aching. I did get up and make myself exercise on the treadmill, but I didn’t feel very well.

I slept fitfully but feel better this morning. This aching seems to come in waves. Cold? Flu? Food poisoning? Don’t know. I plan to take it easy and try to coast through the next two days.

I was drawn to the noon brown bag concert at the Arts Council for two reasons.

It featured some work by student composers and my friend Rhonda was performing. Eileen has been suffering from a cold as well (no body aches for her, however). She said she wanted to get out when I mentioned we could go check this out.

The program was interesting and varied. From Chopin to Chick Corea to music made up recently. Just my kind of venue. The student composers had done an assignment in which they studied an unaccompanied flute piece, then wrote one. I’m not sure who the composer was they studied, but I heard a bit of Density 21.5 by Varese go by in the first of the four pieces. It wasn’t Varese they had studied but I couldn’t help but wonder if I was hearing a third-hand quotation.

I was quite taken with the third piece, “Scherzo: My Apologies” by Callahan Davenport and the fourth piece, “Even vs. Odd” by Jamie Steinman.

Meghan Stahl and Andrew Valesano also did a jazz piece. I struggle with what exactly jazz is supposed to be these days. I see most of the jazz I love as historical music (like Bach) created in its flowering. Its historicity is in tension with its basic nature of spontaneity. Milliken/Hodson were convincing in their historical recreation of spontaneity. I see this as improvising in the baroque style or whatever only situated in the 20th century. Meghan Stahl mentioned that what she was doing a “recreation” of a performance she heard on YouTube of Chick Corea and Bobby McFerrin doing Cores’s classic tune, “Spain.” She chose it because she is a double major: Music and Spanish.

Unfortunately I came home and popped up some YouTube videos and heard where she got her improvs. 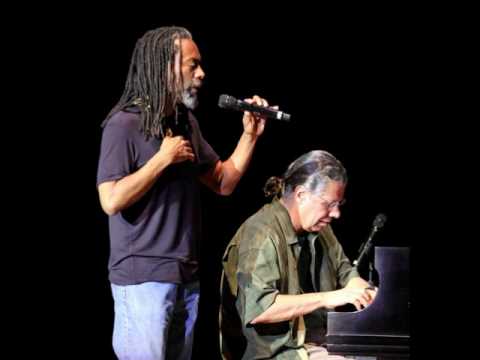 It was beautiful done, but it struck me a bit like Elvis impersonation, admittedly on a bit of more aesthetic and beautiful plane.

Rhonda played well as usual. She accompanied Jessica Hronchek in a witty if difficult satirical piece about a tone deaf singer, “A Word on My Ear” by Flanders and Swann.