I discovered yesterday that it is possible to download articles from the New Groves Dictionary of Music to my Kindle to read. When I mentioned this to Eileen she said I should be teaching Hope people how to utilize their online resources. Flattering, but I do wonder how many profs utilize the extensive stuff available or are even aware of it. I hope I underestimate the number that do.

I am feeling pretty discouraged this morning. The wedding I played yesterday was a nightmare. I hesitate to bitch too much here. Part of my hesitation is realizing that the event held a lot of meaning for the people involved, especially (hopefully) the two people getting married. I think of this kind of wedding as the “church-as-a-backdrop” type wedding. I knew we were in trouble when I walked in and a couple young kids were banging away on my congas and piano. During the course of the afternoon I had to intervene a couple times to keep them from hurting the instruments.

My trepidation was confirmed when the visiting Presbyterian minister advised the jean clad videographer to think of the wedding as a  “Princess Bride” wedding. I seriously doubt if the young man knew  what the fuck he was talking about. Unfortunately, I did. 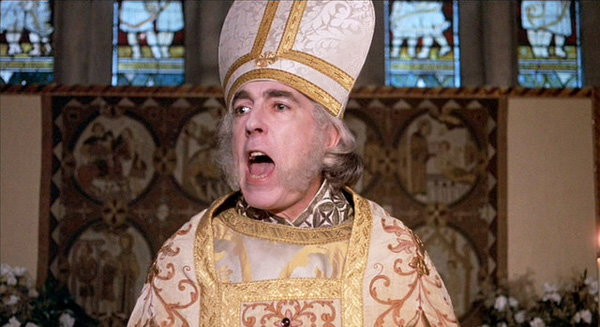 Predictably we began late. The wedding was scheduled at the exact time the huge Tulip Time High School Bands Parade was to begin. This usually stops all local vehicle traffic. The minister whipped by the piano and leaned over and asked what my last name was.

He then went to the front of the church. “How bout that piano player, Steve Jenkins?” he said or something like that prompting unenthusiastic polite applause but effectively quietening them down probably out of curiosity to see what in the world he was going to say.

He then proceed to tell jokes to kill time while we waited to begin.

I am not making this up.

I think maybe a lot of my discouragement comes from not knowing exactly how to proceed musically for this group. I began the prelude with some happy Mozart and Bach. But before long I began improvising. When I improvise, sometimes I watch people. This influences my improvisation when I do this. I respond to the people I see. Yesterday my improvisations kept getting more and more banal. I couldn’t help it.

I think I nailed the pop songs the couple requested. But I’m not totally sure. When trying to render a contemporary popular song with just a piano, I often wonder what part of the original song attracts listeners. I am of course unable to replicate their listening experience of a recording which often includes many musicians and special effects. Even the basic timbres elude me at the keyboard. I hope that the melody means something to them and try to play it the way I hear it from the recording (not from the sheet music although that is a guide).

All this discouragement was made complete when I read a discussion on the Facebook organist page.

Basically dozens of organists (103 comments) complained about how snobby some organists are who refuse to play Gordon Young’s music on the organ. I don’t know why but I blotted out their names above even though this an open public group. 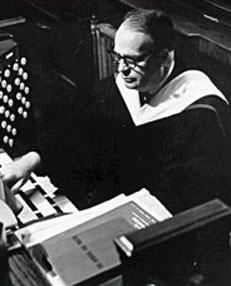 I am one of those that doesn’t play Gordon Young nor use his choral compostions. I actually held a position in Detroit which was Young’s for years: First Pres downtown.

You can see First Pres to the left of the burning Unitarian church (pic from yesterday).

I believe I have the robe Gordon Young is wearing in the picture above hanging in my basement right now.

I remember meeting Young at a Detroit AGO meeting. He asked me if I had seen his latest organ composition. I remember him saying something, “Boy have I got the piece for you!”

I do however sympathize with the commenters who complain that snobby organs were very uncomplimentary to them about playing Young. I didn’t enter the fray myself. Who cares what these organists play?

All in all, a pretty discourage day musically for me. I tried to get some practice in after the ceremony yesterday but the room quickly refilled with the rite of taking pictures. It was so crowded and weird (I had to advise a young person that he should not “hit the piano keys but play them.”) I just went home.

So this morning I will be playing my prelude and postlude without my last solid Saturday practice.  It will probably go fine.